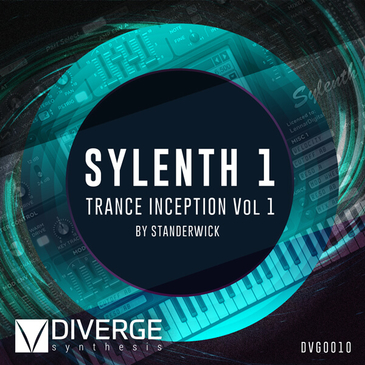 'Sylenth 1 Trance Inception by STANDERWICK' from Diverge Synthesis comes with a whole heap of goodies. STANDERWICK moves over to the titan of all soft synths, Sylenth, gifting us some blistering new sound designs along with sounds that have helped shape his familiar style.

'Sylenth 1 Trance Inception by STANDERWICK' from Diverge Synthesis comes with a whole heap of goodies. STANDERWICK moves over to the titan of all soft synths, Sylenth, gifting us some blistering new sound designs along with sounds that have helped shape his familiar style.

This release is also a bit special as STANDERWICK is giving away some free additional content and an insight into his own production workflow. This includes the Logic X arrangement created for the bank preview, a Mid Bass tutorial video and the Logic X arrangement used to create it. He has also thrown in some kick drum samples taken from a number of his hit tracks and lite versions of other sound banks he recently designed on Spire. Also included is a link to download a free lite version of Soundspot's brand new volume shaping plugin, Evade, used in the Mid Bass tutorial.
Just about everything has been covered in this bank which provides a great anchor point for every section of your Trance productions. Good bass foundation designs along with leads and plucks give way to a breathtaking selection of pads. Inside this offering of sounds you will find plenty of stand-out Presets which could well become the backbone to many a track you create in the future.
A high-quality array of Presets made especially for Sylenth, take a good listen to the demo that STANDERWICK has created. This will demonstrate perfectly what can be achieved using the contents of this fantastic Trance sound bank.
Requirement: Sylenth 1 V3 or higher.
Product Details:
• 17 Lead Presets
• 12 Pluck Presets
• 16 Bass Presets
• 2 Arp Presets
• 5 FX Presets
• 9 Pad Presets
• 3 Keys Presets
Additional Content:
• Project Demo
• 64 MIDI Patches
• 64 Audio Stems
• Logic X Bank Preview Arrangement
• Logic X Mid Bass Tutorial Arrangement
• MIDI Bass Tutorial Video
• 8 Kick Drum Samples
• 3 Spire Soundbanks (Lite) By STANDERWICK
• 100% Royalty-Free

... contains six professional loops produced from scratch, which are ready to use in commercial and private product...

... by Equinox Sounds brings together another set of three collections by the label featuring beautiful, uplifting...

... from Nano Musik Loops provides all three volumes of this series in one super-saving pack. This bundle features...

Trance in itself is an art form that HighLife Samples has mastered well! This pack brings you a step closer to 138B...

... by Nano Musik Loops brings you five masterful Construction Kits featuring Orchestral strings to give you that i...

HighLife Samples ... brings you a step closer to learn how the pros are making their Trance tracks. It is time for...

'Voices Of Heaven' by Alkyne Tunes is an atmospheric, ambient vocals pack perfect for many genres from Chillout and...

... from Equinox Sounds is the eighth installment in this series of 10 beautiful, uplifting and emotional Trance Co...