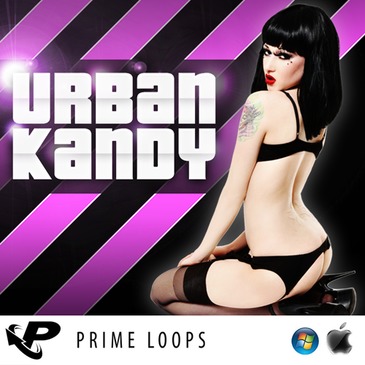 'Urban Kandy is here to satisfy your need for that ultimate crossover between borders of continents and soundscapes, rocking any dancefloor that doesn't shy away when things might go "pop", as sweet as a sugar cane and as banging as a night at an Ibiza superclub!

'Urban Kandy is here to satisfy your need for that ultimate crossover between borders of continents and soundscapes, rocking any dancefloor that doesn't shy away when things might go "pop", as sweet as a sugar cane and as banging as a night at an Ibiza superclub!


'Urban Kandy' melts together ultra-fat American Hip Hop and House beats with those Eurocentric Synth Pop and Rave sounds which give any track that colourful deep edge of grandeur and drama. Think Miami meets Paris (and we don't mean Hilton, although the famous It-Girl might very well spill her glass of Cristal to these sounds and rhythms)!

Whether you want to give your songwriting that Urban edge or want to prove your Rap is the smartest, these are all the tools you need to make your way straight to the clubs and charts around the globe. The 140+ loops & one-shots contained in 'Urban Kandy' provide endless combinations of beats, percussion, synth spheres, rolls, stabs, sound effect, and more.

'Urban Kandy' brings also five Construction Kits in the tempo range between 113 and 133 BPM, just the right pace for any pop-driven überclub melter set to rule the peaktime, getting the ladies into a dancing sweat and the gents into bringing out their swagger.

You won't have to worry about being sued by the stars while working with 'Urban Kandy' as all sounds in this awesome pack have been exclusively produced by Prime Loops' multi-faceted experienced producers and thus come 100% royalty-free and ready-formatted in the sweetest 24-Bit quality for all major sound applications and machines.

Get the ice-cold champagne out, add some strawberries and crank the volume up - Baby: We're going Urban Kandy!

Prime Loops is proud to bring you the best of the baddest sounds that ever hit your speakers, and this down and dir...

... is a collection of pure to the chronic, devastatingly hypnotic dirty south vibes with that oh so soul rnb vibe...

... is a high octane collection of 20 Dirty South, radio-ready Construction Kits including elements from some of th...

... is the powerful follow up to the critically acclaimed first installment, bringing you over 1GB of multi-format...

... from Jungle Loops features 15 of the hottest Construction Kits inspired by artists such as Rick Ross, Lil Wayne...

... from YnK Audio is a brillant collection of six Young Money Style Construction Kits, inspired by radio hits such...

... from Strategic Audio features 20 hard-hitting Construction Kits for a total of 4 GB of big, epic-sounding Dirty...

... is a tricked out ride full of mighty loops, sounds and FX from the trusted House of Prime Loops. Do you have wh...

'Dirty Electro Bass Loops' is sure to see the dance floor grinding! Prime Loops is extremely proud to reveal this h...

If you're looking to smash up the clubs with the hottest Dirty South sounds available, then have a listen to this b...

... by Dirty Production is a dope pack that contains 10 Dirty South/Trap Construction Kits, loaded with deep and wi...

... from Prime Loops gives you all the tools you need to make your mark in the sizzurp sippin' Dirty South game. Th...