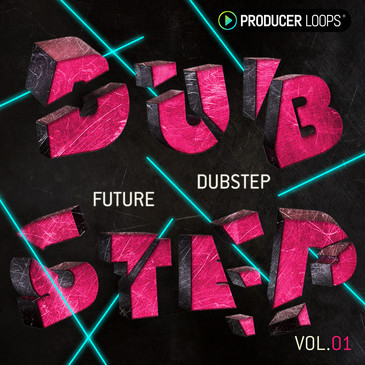 
Combining the power and aggression of Dubstep with an almost quirky air of retro-futurism, 'Future Dubstep Vol 1', produced by Eddy Beneteau, delves deep into new sonic territory. You'll find everything from deep wobs and dark FX to 8-Bit synth glissandos and euphoric pads.

Each kit is underpinned by a huge rhythm section, incorporating the traditional half time Dubstep beat, all of which is separated out into various stems allowing you to create endless new variations.

One-shots of all percussive sounds are also included, so you can create new complimentary beats and fills.

Read on to find out more about the professional feature set including tail/release loops and MIDI files.

Like so many other Producer Loops products, 'Future Dubstep Vol 1' includes MIDI files for the majority of musical phrases heard in each Kit, allowing you to seamlessly mix your favourite synths and samplers with the sounds contained in the pack.

Each Construction Kit features one-shot melodic and drum samples, allowing you to create new beats, fills and loops to compliment the existing material. Simply load them up into your sampler of choice and create an infinite number of new beats and phrases.

... by Production Master blends the allure of ominous basslines with heavy-weight, out of this world beats, bringin...

'Ammo For Xfer Serum' is the ultimate Serum bank to take your Dubstep, Hybrid or Trap tracks to a whole new level....

What About: Dubstep Salvation

... comes with Construction Kits that allow producers to gain the knowledge on what exactly goes into a Dubstep tra...

... by Production Master will blast you into a cosmic cloud of expertly engineered Melodic Dubstep sounds and beats...

... by Smokey Loops is a super collection of Dubstep sounds ready to inject into your tracks for creating the kind...