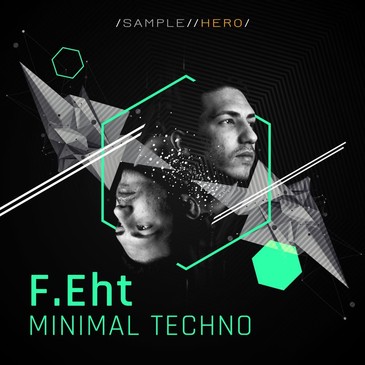 'F.eht: Minimal Techno' from Sample Hero are more than proud to present Minimal Techno Professional F.eht with his brand new smple library which is a definitive collection of Royalty-Free samples for your next Minimal Techno productions.

'F.eht: Minimal Techno' from Sample Hero are more than proud to present Minimal Techno Professional F.eht with his brand new smple library which is a definitive collection of Royalty-Free samples for your next Minimal Techno productions.

After releasing more than 300 tracks within the Minimal Techno genre, F.Eht has delivered for the first time a breathtaking selection of content for every element of Minimal Techno tracks, bringing solid and refined loops to the mix.
Residing in the outskirts of Frankfurt in a small town called Giessen, a journey started for a young man who is now known as the producer and DJ, F.eht. Growing up in this quiet town in the '90s prepared him for the path he was to start walking down in his late teens. Since embarking on his journey at the age of 16, his horizon has broadened even more. On the production side, F.eht has released a catalogue of music which has received support from a lot of big names, as well as the support of other up and coming artists over recent years that have grown along side him. He has been released on highly respected labels such as Flat Belly, Samani, Hamburg Aufnahmen, Frucht, Innocent and Krad.
The included loops and single shots are produced on the highest standard and focused on 122 BPM. The single shot collection offers you a wide range of creating own beats and modulate existing sounds. You get every ingridient on your hands for creating Minimal Techno in no time.
Royalty-Free:
The entire content of this sample library is 100% Royalty-Free. Therefore you can use the files and loops in any commercial production without paying any hidden costs.
Please Note:
Some elements are not included in the pack. These are for demonstration only.
Product Details:
• 452 Files in Total
• Over 223 MB of Content (Zipped)
• 452 WAV Files
• 44.1kHz/24-Bit Quality
• Categorised & Tempo Labelled
• 110 Analogue Loops (Grooves, Sequences, Melodies, Elements, FX Loops, Pad Loops)
• 22 Drum Loops
• 50 Kicks
• 50 Snares
• 50 Claps
• 50 Hi-Hats
• 50 Percussions
• 50 Analogue Synths
• 17 Synths
• 3 Basses
• 100% Royalty-Free

'Unity Samples Vol 17: D-Unity, Dino Maggiorana' by Unity Records consists of over 343 samples targeted towards you...

'Techno Elements' by Smokey Loops is a classic Techno set of loops for adding to your library for those moments of...

... by Engineering Samples RED is a sample pack loaded with 765 MB of outstanding analogue samples....

... by ZTEKNO is inspired by superstars of the Techno scene like Adam Beyer, Shasha Carassi, Pig & Dan, Drumcode, O...