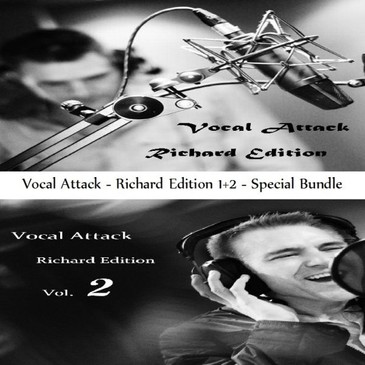 
The vocal samples are useful in different styles and genres, like Ambient, Chillout, Lounge, Pop, Soul, Rock, and many more.

Most of the samples have key and BPM information for ease of use. Richard earned his wings as the prefered session voice on numerous records, production, live and writing projects for a diversity of recording artists around the world.

His voice is most well known by the eight million people every weekday morning in the UK who hear the great jingles he sings for the Chris Moyles BBC Radio One Breakfast Show.

He sang the BBC TV promo for 'Any Dream Will Do' for Sir Andrew Lloyd Webber and also his voice recently appeared on "The Friday Night Project", "Big Brother Celebrity Hijak" and "When Moyles Met The Radio 1 Breakfast DJ's".

Richard was hired to help out in a workshop of 'Quadrophenia', the Musical, alongside Pete Townsend for a production to be staged at the National Theatre London with direction by Trevor Nunn.

... from Nano Musik Loops provides you with six banging Construction Kits. This top product brings you a variety of...

... is a collection that contains 101 piano MIDI files. If you are looking for catchy piano melodies you'll be sure...