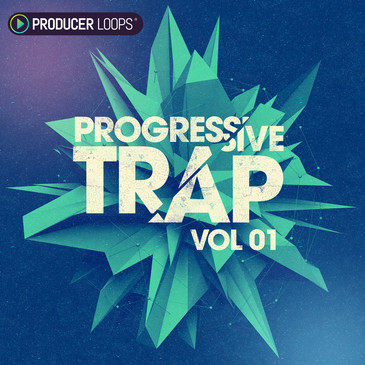 Trap has emerged to become one of the most popular Urban styles of music in recent times, and with the conventions of the genre so firmly established, it takes something a little special to stand apart from the crowd. Enter 'Progressive Trap Vol 1'; a brand new series of blazing hot Construction Kit products.
You'll find massive 808 kicks, rapid-fire hats and tight snares, all set against a rich sonic background of pads, glitched vocals and lush chords. The resulting sound takes Trap into more musical territory, although you could easily create a more typically sparse Trap arrangement using the supplied loops, One-Shots and MIDI files.
MIDI Files Included:
Like so many other Producer Loops products, 'Progressive Trap Vol 1' includes MIDI files for the majority of musical phrases heard in each Kit, allowing you to seamlessly mix your favourite synths and samplers with the sounds contained in the pack.
Advantages of MIDI:
While the supplied ACID/Apple Loops/REX files are extremely flexible and powerful, MIDI has the added benefit of allowing you to go to extremes of pitch and tempo beyond which the loops were originally recorded, with no time stretching or pitch shifting artefacts. Furthermore, you can make tweaks to the riffs so they fit perfectly into your existing mixes.
One-Shot Samples:
This pack also includes One-Shot samples, allowing you to create new beats, fills and loops to compliment the existing material. Simply load them up into your sampler of choice and create an infinite number of new grooves and phrases.
Royalty-Free:
All of the loops in this product are 100% Royalty-Free (including the vocal loops), so once purchased, you can use these loops in your commercial releases without having to pay any hidden costs.
Specifications:
• 5 Construction Kits
• 145 Individual Files
• MIDI Included
• ACIDized WAV Files
• Apple Loops/AIFF Files
• REX2 Loops
• Reason ReFill
• Loops sync to BPM
• 44.1 kHz/24-Bit
• PC/Mac Compatible
• Royalty-Free (No Exceptions)
How to Order:
Simply click "ADD TO CART" at the top of this page and choose the element or format you would like, then enter your details. Your Download Link will be sent to you by email immediately after your payment has been received.

... continues this heavy-hitting series, known for its distinctly sinister and haunting vibe. From deep 808 basses...

... brings another series packed with vocals and MIDI loops. These male vocal lines are ready to soar over any mode...

... is the second volume of this emotional piano melodies series and comes with new melody ideas, atmosphere sounds...

... by Vandalism brings you female vocals and MIDI loops. These vocal lines are ready to soar over any modern track...

... by Samplestar combines the lush melodic elements of mainstage Trance with anthemic Progressive House, ready to...

Function Loops is back with another bombing collection of insane Progressive Psytrance sounds. Inspired only by the...

What About: Progressive House Plasma

... by W. A. Production is a pack designed to give you what you need to create the most infectious, danceable and r...

... by True Samples is a Melodic Techno sample pack based on five Construction Kits loaded with WAV stem loops and...