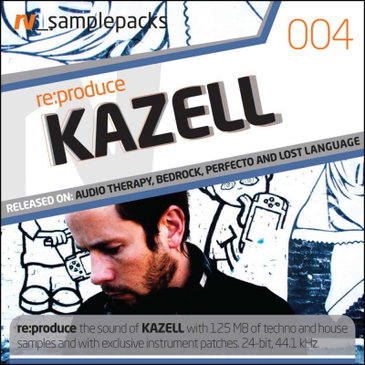 'Re:Produce 004 - Kazell' takes some of the dark and complex House sounds of British DJ Kazell and makes them available for your productions. This 125 MB pack is both distinctive and open-ended enough to fit into your own tracks.

'Re:Produce 004 - Kazell' takes some of the dark and complex House sounds of British DJ Kazell and makes them available for your productions. This 125 MB pack is both distinctive and open-ended enough to fit into your own tracks.

Kevin Bazell (better known as Kazell) is a British DJ and producer who is now based in Los Angeles. He has released music on well-regarded labels like Alternative Route, Audio Therapy, Bedrock, Perfecto and Lost Language, and his productions have been featured on compilations by renowned DJs like Sander Kleinenberg and Nick Warren.

Aside from a busy DJ schedule - which has included touring with Sasha and Digweed across North America - Kazell also holds down a label residency for his Influx-Audio imprint at the LA superclub "Avalon". As a producer, Kazell consults for software giant Native Instruments. He also recently delved into sound design by working alongside the legendary film composer Harry Gregson Williams to add his own unique twist to the sound of the Disney blockbuster "Chronicles of Narnia: Prince Caspian".

Kazell has engineered his re:produce pack to offer a unique look into his world of production.

"Its great to build a track from the ground up synthesizing every element but for most of us that's just not realistic. With this pack I wanted to share some of the custom building blocks I reach for when starting a new track. I tend to write these types of parts when I'm in between projects and keep them as flexible and open ended as possible. I hope you enjoy this sample pack." - Kazell

... by Loopoholics is focused on giving you all of the warmest and unique sounds from this genre....