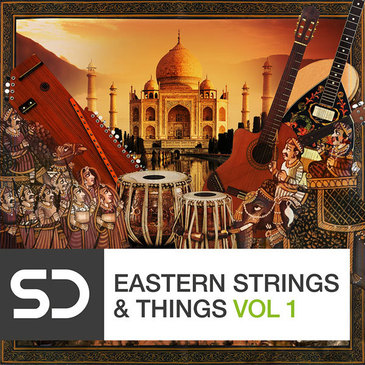 'Eastern Strings & Things Vol 1' is a brand new collection of loops and one-shots recorded and produced on instruments that are hybrid in nature, truly bespoke and not commonly found in your average music shop or any other loop packs.

'Eastern Strings & Things Vol 1' is a brand new collection of loops and one-shots recorded and produced on instruments that are hybrid in nature, truly bespoke and not commonly found in your average music shop or any other loop packs.

Read on to find out more about the unique instruments included in this hugely powerful multi-format library.
The Sitouki:
The Sitouki is a hybrid instrument which is hallway between a Sitar and a Bouzouki. It sounds like a sitar but allows for different techniques that are not possible on a Sitar. The Sitar is now a hugely popular instrument which features in many compositions, and these particular loops from the Sitouki will give you the edge.
The SazOud:
The SazOud or just 'Oud' in the loop packs is an attempt at fusing the sound of two Turkish instruments into one; with nylon fretless Oud and the steel understrung Saz drones. When striking the nylon strings the Saz strings are struck in sympathy by the nylon strings, a very unique sound. The sounds are akin to other eastern instruments such as the Sarod, Swarmandal and Tampoura.
These are both Indian accompaniment drone based instruments and as such seldom take on melodic duties. The Tampoura is a bass drone instrument and the Swarmandal is a form of Indian harp both of which were popularised in the 60s primarily through music of The Beatles.
For example Tampoura features heavily on the track Tomorrow Never Knows and the Swarmandal is a prime feature in the song Strawberry Fields Forever.
Here both instruments are grafted on to one body which sets up counter resonances. Many of the loops for both of these instruments are played in a more contemporary way than is normally the case in Indian classical music.
Percussion Instruments:
Percussion loops have been added as a bonus to enhance the pack and provide rhythmic context for the loops, including;
• Darabouka
• Bodhran
• Tabla
• Sitouki (played percussively)
Keys or Indian Ragas:
All instruments are predominantly based around the tonal centre of D which the exception of the Sitouki where a capo is used to bring about an F tonality. Drones and modal playing (Ragas) is the norm for most eastern instrumentation.
However there are many ways of interpret these tonal centres in other keys outside of D both in minor and major variations. D major can be played over the keys of:
• G major/E minor
• B Minor
• A major/F# Minor
D minor in turn can be played over:
• F Major
• C Major
• Bb major
• D Harmonic and Melodic Minor
Some playing is based around other minor mode Ragas including:
• Lydian Dominant/Vachaspati
• Phrygian Dominant/Vakulabharanam
Meter, Timing & Indian Talas:
Eastern/Indian phrasing and bar length (Talas) is seldom based on a four count or common time. As such the phrasing on many of the loops run right across bar lines. The lengths of the loop bars are normally between 4 and 8 bars of 4/4 but there are some longer, shorter and irregular lengths to suit the length of the phrase and maintain authenticity and integrity.
It is highly recommended that you experiment with the start point of loop in your DAW to set up or counteract anacrusis phrasing for example. Many of the loops follow simpler more western based rhythms and phrases and these can be use in a more usual manner.
Tech Specs:
• 24-Bit Quality
• 1.03 GB of Content
• 16 Oud Loops 80 BPM
• 36 Sitouki Loops 80 BPM
• 17 Swarmandal Loops 80 BPM
• 5 Tamboura Loops 80 BPM
• 19 Oud Loops 100 BPM
• 29 Sitouki Loops 100 BPM
• 11 Swarmandal Loops 100 BPM
• 6 Tamboura Loops 100 BPM
• 15 Oud Loops 120 BPM
• 33 Sitouki Loops 120 BPM
• 16 Swarmandal Loops 120 BPM
• 8 Tamboura Loops 120 BPM
• 22 Oud Loops 140 BPM
• 28 Sitouki Loops 140 BPM
• 15 Swarmandal Loops 140 BPM
• 6 Tamboura Loops 140 BPM
• 63 Percussion Loops
• 14 Tamboura One-Shots
• 32 Swarmandal One-Shots
• 45 Bonus Instrument One-Shots

... by Al Amin brings you Ethnic instrumentals in the form of the oud instrument and includes loops, one-shots, Con...

'Morocco Traditional' by Al Amin takes you on a journey into Morocco's traditional music with five Construction Kit...

... allows you to create your own Hip Hop percussion rhythms. This pack contains over 430 ethnic percussion samples...

... by Al Amin is a pack loaded with magical ethnic sounds including more than 50 Loops and 40 One-Shot Drums ready...

... contains a multitude of melodies, hooks, riffs and licks played by instruments straight from the ethnic music w...

... by Concept Samples delivers a collection of authentic North American Flute samples straight to your DAW. Inside...

... is a new collection from BeatFactory and it features bhangra Loops that can be used in various production genre...

... by Blackwood Samples is a bundle containing the two volumes of the 'Flamenco Guitars' series....