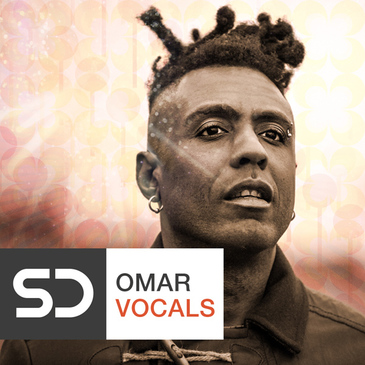 'Omar Vocals' from Sample Diggers is a fantastic collection of ad-libs, short ideas, one-shot samples and fully produced loops from this chart-topping vocalist designed for producers of Neo Soul or any other genre that needs soulful world-class vocal performances.

'Omar Vocals' from Sample Diggers is a fantastic collection of ad-libs, short ideas, one-shot samples and fully produced loops from this chart-topping vocalist designed for producers of Neo Soul or any other genre that needs soulful world-class vocal performances.

To get Omar away from his busy schedule was no mean feat, but once Sample Diggers got him in the studio, the result was pure gold. Omar had a massive chart-topping hit in the 90s with There's Nothing Like This, but that was only the beginning and since then he has gone from strength to strength, releasing numerous albums, also doing collaborations with artists such as Stevie Wonder, Common, Erykah Badu, Angie Stone, Estelle & Rodney P, to name a few.
Omar's unique signature sound and vocal tone is unmissable and for Sample Diggers to be able to bring you this exclusive pack is a real honour. Omar Lye-Fook has been described by some as the father of British Neo Soul; a title that is well deserved.
With radio support from Giles Peterson, Trevor Nelson and a genuine respect from his fans, not only in the Soul scene, Omar also has a following in the Hip Hop, Garage and House scenes too and has been remixed by top producers such as Zed Bias, Henrik Schwarz and many more.
Omar's latest album The Man has been well received and recently he did a Boiler Room appearance live from Giles Peterson's basement alongside his brother The Scratch Professor, who is also another talent from this extremely musical family.
With this pack all bases are covered, but the focus is on straight-from-the-heart Soul. The samples range from 80-120 BPM and were recorded through the Universal Audio 6176 and a Focusrite ISA preamp, to add that extra warmth at the input stage.  The pack offers clean and processed versions of the samples and there are also produced loops at 120 BPM aimed at the Garage and House producers.
There are also spoken word samples, ad-libs, one-shots, short ideas and sound designed vox FX that can be used in a variety of genres. All the samples and loops are tagged in the file name by tempo and key, making them easy to use in any DAW or sampler.
If you want the real sound of UK Soul in your productions, be sure to grab this pack today. Make sure you check out the demo track and samples, or download the free taster pack. The pack features over 400 MB of Royalty-Free original samples recorded at 24-Bit/44.1kHz.
Please Note:
The vocal samples are completely Royalty-Free but the use of Omar's name in any production is forbidden without prior consent. The backing track for the demo was produced by Danny Modular.
Tech Specs:
• 430 MB
• 24-Bit/44.1kHz
• Tagged by BPM and Key
• 80-120 BPM
• 366 Samples
• 41 Ad-libs
• 14 Short Ideas
• 91 One-Shot Samples
• 10 Produced Loops
• 36 Spoken Samples
• 16 Vox SFX Samples
• 184 Studio Processed Samples

... brings you five Trap Construction Kits to incorporate into your next productions. This pack comes with 100% Roy...

... by Samplestar is full of silky smooth soulful melodies met with cutting-edge urban beats in a unique fusion of...

... by Undisputed Music is an incredible Soul fusion sound pack designed to give you a creative edge when making So...

... is the latest instalment of this Soulful Construction Kits series. This product is inspired by RnB, Soul & Neo...

... by Hot Music Factory is the third in this tasteful R&B and Neo Soul grooves series. This product has that sexy...

... is full of smooth soulish chords, vox and smooth keys. This product is inspired by Neo Soul and Gospel hit make...

The Soul Of Neo 6

... continues this series with a collection of feel good Neo Soul tunes, featuring heartfelt chords and licks that...

The Soul Of Neo 7

... continues this series with a collection of feel good Neo Soul tunes, featuring heartfelt chords and licks that...

... by Samplestar is a pack fusing contemporary R&B and 70s style Soul with elements of Hip-Hop, which aims to deli...

... is the second collection of of tasteful R&B and Neo Soul grooves. This product has that sexy swag with super sm...