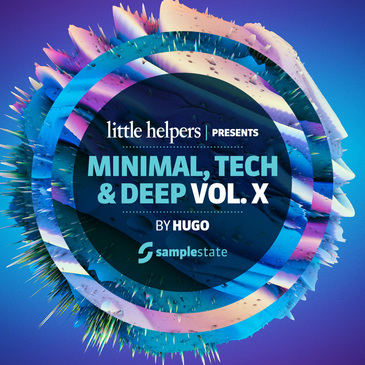 Much mystery surrounds Hugo, but his music speaks volumes. Releasing quality music since 2003 and featuring releases and remixes for 20/20 Vision, Kling Klong, Gruuv, Suruba X, Little Helpers, Mobilee and his own OODOO imprint.
Little Helpers is a conceptual digital label courtesy of Andrew Rasse (a.k.a. Butane) and Sean O'Neal (a.k.a. Someone Else) launched in December 2009. Currently the third most charted label of 2017 on Resident Advisor and reaching a landmark 300th release with Hot Creations's Jamie Jones no less, Little Helpers' concept, music and philosophy has seen them achieve a cornerstone position in the underground scene.
This new series of sample products takes this concept into new territory and offers an inspiring and pack jam-packed product,  with all the essential building blocks for your next Minimal, Tech, Techno and Deep productions.
This pack comes in two main formats as well as specific formats for convenience.
The Apple Loops pack includes Apple Loop .aif files with pre-analysed and tagged drum and music loops. You also receive a third party sampler instruments as well as all the other content in the other formats such as REX2.
The WAV pack is just that, a standard WAV pack. If in doubt then select this one. It contains standard WAV files and is suitable for any DAW system. You will also receive third party sampler instruments as well as all the other content in the other formats such as REX2.
Check out the demo for an idea of what this quality product has in store.
Product Details:
• 24-Bit Quality
• 961 MB
• 19 Clap Loops
• 132 Full Drum Loops Incl. Variations
• 40 Hat & Shaker Loops
• 21 Kick Loops
• 91 Perc Loops
• 303 Drum REX2 Loops
• 53 Bass Loops
• 53 FX Loops
• 78 Music Loops
• 18 Vox Loops
• 202 Music REX2 Loops
• 21 Clap & Snare Samples
• 23 Cymbal Samples
• 22 Kicks
• 3 Soft Sampler Patches for EXS24, Halion, Kontakt & NN-XT

... brings you another set of seven Construction Kits inspired by artists such as Dom Dolla, Pickle, Fisher, Dennis...