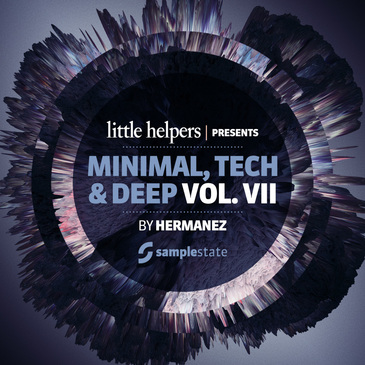 'Little Helpers Vol 7: Hermanez' is the seventh volume in the 'Little Helpers' series, produced by the Belgium born underground powerhouse that is Hermanez.

'Little Helpers Vol 7: Hermanez' is the seventh volume in the 'Little Helpers' series, produced by the Belgium born underground powerhouse that is Hermanez.

Hermanez is perhaps mostly associated with his grooving, tribal-flecked Tech-House productions which have helped him find favour with the great and good including Luciano, Loco Dice and Reboot to name a few. A closer look at his back catalogue unveils an all-encompassing production portfolio that confidently moves through the different realms of Techno.
With releases on quality labels such as Viva Music, Leena Music, Noir and Suara, Serkal Music and Inmotion Music, and not to mention releases on his own Aella Music imprint which he runs together with long-time friend Ramon Tapia, Hermanez has been zigzagging the planet delivering his perfect fusion of House and Techno, incorporating minimal undercurrents and rhythmic building blocks to clued-up revellers the world over.
This product is a conceptual digital label courtesy of Andrew Rasse (a.k.a. Butane) and Sean O'Neal (a.k.a. Someone Else) launched in December 2009. Each release on 'Little Helpers' is a strong, reduced groove-tool aimed to satisfy the increasing number of digital DJs.
Much like the traditional locked groove vinyl, these tracks are suitable for looping, editing and layering. Yet at the same time, each track has enough variation to stand on its own. That is, each tune, lies somewhere between a full track and a DJ tool, focusing solely on the rhythm or a singular idea rather than extraneous arrangements.
This new series of sample product takes this concept into new territory and offered is an inspiring pack jam-packed with the essential building blocks for Minimal, Tech, Techno and Deep productions.
This pack comes in two main formats. The Apple Loops pack includes .aif files with pre-analysed and tagged drum and music loops. You also receive third party sampler instruments as well as all the other content in the other formats such as REX2.
If in doubt then select the standard WAV pack/full zip. It contains standard WAV files and is suitable for any DAW. You will also receive third party sampler instruments as well as all the other content in the other formats such as REX2.
Check out the demo for an idea of what this quality product has in store.
Product Details:
• 24-Bit Quality
• 1.07 GB
• 218 Drum Loops
• 66 Bonus Kick, Perc and Top Loops
• 284 Drum Loop REX2 Files
• 30 Background Loops
• 30 FX Loops
• 30 Modular Loops
• 50 Music Loops
• 140 Music Loops REX2 Files
• 40 Bass Hits
• 690 Clap & Snare Samples
• 50 Hat Samples
• 60 Kick Samples
• 50 Perc Samples
• 60 SFX
• 30 Vocal FX
• 46 Soft Sampler Patches for EXS24, Halion, Kontakt & NN-XT

'Unity Samples Vol 2: D-Unity' by Unity Records is a sample pack that is solely focused on creating fat-sounding Te...