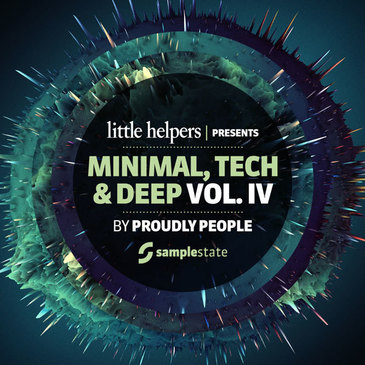 Since forming in 2011, this Milan based production duo have made a huge impression on the underground music scene, racking up releases on labels such as Inmotion, Moan Recordings, Rawthentic Music, Etruria Beat, Surface, Earlydub Rec, Little Helpers, Art of Dark, Monday Morning Records, Natural Beat and more.
With Summer residencies at Sankeys Ibiza for Magna Carter, Kina Music, Etruria Beat and Moan, Proudly People have made an incredible impact on the Underground House music scene and look set to continue their meteoric rise.
Little Helpers is a conceptual digital label courtesy of Andrew Rasse (a.k.a. Butane) and Sean O'Neal (a.k.a. Someone Else) launched in December 2009. Each release on Little Helpers is a strong, reduced groove-tool aimed to satisfy the increasing number of digital DJs.
Much like the traditional locked groove vinyl, these tracks are suitable for looping, editing and layering. Yet at the same time, each track has enough variation to stand on its own. That is, each tune, lies somewhere between a full track and a DJ tool, focusing solely on the rhythm or a singular idea rather than extraneous arrangements.
This new series of sample product takes this concept into new territory and offered is an inspiring pack jammed full of the essential building blocks for Minimal, Tech, Techno and Deep productions.
This pack features 146 drum loops with full loops, top loops and also percussion loop variations. 125 music loops including bass lines, chords, background, FX, synth and vocal loops are also included. This collection also features 85 individual drum hits as well as FX samples, vocal samples and some useful sine wave samples.
As well as this Samplestate has programmed each of the individual hits into EXS24, Halion, Kontakt, and NNXT format to make them as usable as possible.
This pack comes in 2 main formats:
Apple Loops:
Includes Apple Loop AIFF files with pre-analysed and tagged drum, and music loops. You also receive 3rd party sampler instruments as well as all the other content in the other formats such as REX2.
WAV Pack:

... by Sharp is an ultimate synth tool for any Techno producer. With it, you can drag any WAV loop, work it to your...

... by ZTEKNO is inspired by superstars of the Techno scene like Adam Beyer, Shasha Carassi, Pig & Dan, Drumcode, O...