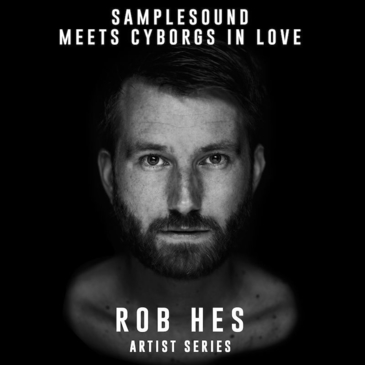 'Samplesound Meets Cyborgs In Love: Rob Hes' is part of Samplesound's 'Artist Series', the label's close collaboration with well known and established producers in the underground world. This pack contains sounds by Rob Hes who released under the Techno record label Cyborgs In Love.

'Samplesound Meets Cyborgs In Love: Rob Hes' is part of Samplesound's 'Artist Series', the label's close collaboration with well known and established producers in the underground world. This pack contains sounds by Rob Hes who released under the Techno record label Cyborgs In Love.

Rob Hes is one of the brightest new stars on the Techno horizon. His sound can be described as raw, energetic but very musical at the same time. He is one of those artists where you immediately recognise his work as being his, without him repeating a few signature tricks over and over again.
With more than 15 years of studio experience and countless releases under different aliases, this is definitely one of those raw diamonds that has remained hidden for far too long. But don't worry, with recent releases on Dubfire's 'SCI+TEC', Christian Smith's 'Tronic', the infamous 'Bedrock' label and his upcoming release on Oliver Huntemann's Senso, he's getting more eyes on him every time his music hits the stores.
Featuring Techno bass loops, drum loops, percussion loops, one-shot kicks, one-shot claps/snares, one-shot hi-hats and top loops you can take inspiration from a master in the genre and create your own Techno style.
Inside the folders, you'll find 94 samples in WAV format and 62 samples in AIFF format (Apple Loops) which you can use in Apple Logic, Ableton Live, Pro Tools, Cubase and others.
The scope of musical genres released under this label covers various Electronic music niches like Techno and Tech-House as well as single-instrument sample libraries consisting of loops and sample to inspire all the underground producers.
Samplesound: give shape to your underground ideas.
Product Details:
• 22 Drum Loops
• 28 Bass Loops
• 20 Full Loops
• 11 One-Shot Clap Snare
• 10 One-Shot Hi-Hats
• 11 One-Shot Kick Solo
• 26 Perc Loops
• 28 Top Loops
• 44.1kHz/24-Bit
• Folders: Bass Loops, Drum Loops, Full Loops, One-Shots, Perc Loops, Top Loops, One Demo Song
• 94 24-Bit WAV Samples
• 62 24-Bit AIFF Samples

... by Sharp is an ultimate synth tool for any Techno producer. With it, you can drag any WAV loop, work it to your...

'Within The Warehouse' by Soul Rush Records is a venture that celebrates the sound of Techno in all its dark and tw...