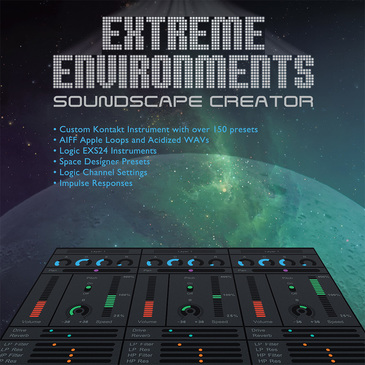 'Extreme Environments' from Zero-G and Xfonic is a unique sound design tool that allows you to quickly and easily create dense and complex ambiences, ranging from musical pads through to realistic room tones and extreme sound design.

'Extreme Environments' from Zero-G and Xfonic is a unique sound design tool that allows you to quickly and easily create dense and complex ambiences, ranging from musical pads through to realistic room tones and extreme sound design.

"This is a sound designer's dream… delivering an endless and interesting array of edgy textures, drones and washes."
- (Computer Music magazine, UK).
This sound library was created by Si Begg, the same producer who created the highly successful titles "Distorted Dancefloors" and "Electro Glitch Essentials" both of which got fantastic reviews in the top pro-audio magazines.
The main feature of 'Extreme Environments' is the Kontakt instrument which combines a state-of-the-art user interface with the loops and impulse responses to give you a highly flexible tool for creating a huge variety of beds, drones, pads and FX. It comes with over 150 presets.
The core of the instrument is the three channels where you can select any one of the 142 loops. For each channel you can then control the pitch, time stretch, amplitude & filter envelopes, saturation and reverb send. All three channels are then mixed together and put through master high pass and low pass filters, then finally a limiter.
The other key part of the instrument is the convolution reverb, which any of the three channels can be sent to. You can choose any one of the 86 bespoke impulse responses, ranging from straightforward to extreme sound design. This adds great depth and atmospheric detail beyond the standard reverbs you might usually come across.
The combination of all these features makes for an almost limitless palette of sound creation. In addition the EXS24 instruments, Apple Loops, Space Designer presets and Channel Strip Settings give Logic Pro X users the option of creating their own combinations of sounds and FX within Logic. Also, the raw audio loops can also be used as building blocks to create your own beds and drones.
'Extreme Environments' is made up of the following elements:
• 'Extreme Environments' Kontakt Instrument with custom GUI and over 150 presets (requires Kontakt version 5.3.0 or later)
• Audio loops. Available as AIFF Apple Loops or ACIDized WAV files
• Impulse responses for use with any convolution reverb
• Logic EXS24 Instruments and Reason NN-XT Instruments
• Space Designer Presets
• Logic Channel Strip Settings
Please Note:
This library has been compressed to segmented .RAR format for the download. After purchase you will download 4 separate RAR files, the three parts each being 500 MB in size, and the fourth being 109 MB.
After downloading the four files, make sure they are all in the same folder, then double click ONLY the first RAR file (...Part1.rar) and ALL FOUR of the RAR files will then expand automatically (all in a single operation) to produce one folder containing the whole library with all samples / all formats.
Note that you must have a full version of Kontakt (version 5.3.0 or later) to use the Kontakt instrument files within this product.

'Ambix 2' by Producer Master is proud to present an enigmatic soundbank. Wander around between mythical Soundscapes...

... by Helion Samples brings the eleventh volume of beautiful piano melodies and atmosphere sounds which will add i...

... by Helion Samples brings the twelfth volume of beautiful piano melodies and atmosphere sounds which will add in...

... by Helion Samples presents the tenth volume of beautiful Piano Melodies and Atmosphere sounds which will add in...

... by Laniakea Sounds is an authentic collection of dreamy and blurry sounds represented by layered vocal textures...