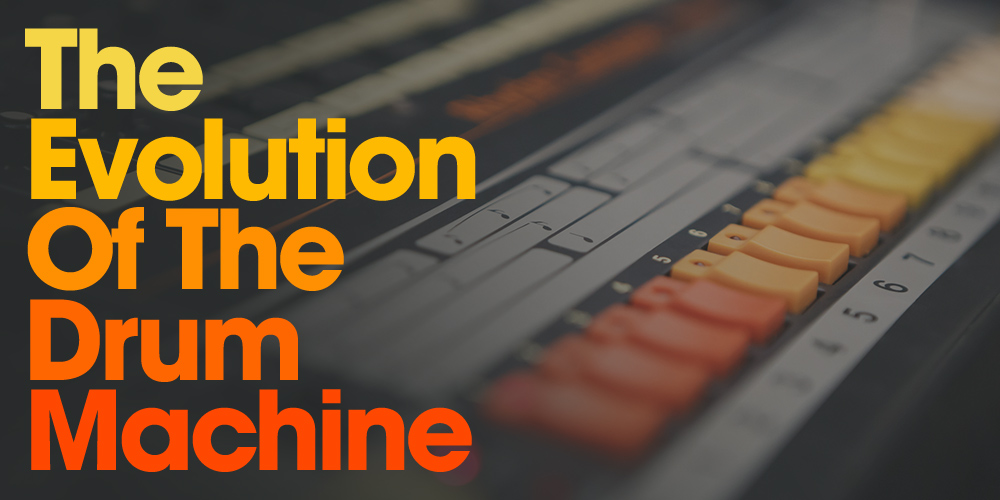 All throughout history, the evolution of cultural and artistic movements have been inextricably linked to parallel transformations in the field of technology. This synergy between art and technology has produced stellar successions of ingenious inventions driven by the eager desire of finding new ways of expression.
One of the most remarkable examples of this interplay between art and technology is that of the drum machine, a device that, in spite of its humble origins, would provide the necessary insight to spawn a whole new way of writing, producing and performing music, changing about all facets of music creation and production at their most fundamental level.

The most primitive device resembling a drum machine is the Rhythmicon, a mysterious artifact conceived by russian inventor Leon Theremin, known for the invention of the Theremin, another early contraption in the history of electronic instruments.
Even though quite unanimously regarded as the first drum machine ever created, the Rhythmicon was more a scientific curiosity born out of the intellectual challenge to overcome the physical limitations of a single piano player, a notion most obviously revealed by the purely mathematical foundations that guided the eccentric logic of its polyrhythmic patterns, which instead of being based on the traditional subdivisions found in musical structures, was rooted in the mathematics of the overtones series, a concept more related to physics than music. This quirk coupled to the fact that it played tonal sounds instead of drum sounds made the Rhythmicon a precursor more than a pioneer in the evolution of the drum machine.

The next milestone in the prehistory of the drum machine came along with the Rhythmate, a machine conceived and built by Harry Chamberlin, an American engineer very fond of music and considered by many as one of the forefathers of modern sampling for his innovative use of tape loops as the sound source to his two musical instruments: the Chamberlin Rhythmate and the Chamberlin Keyboard, which would later on become the famous Mellotron.
The Rhythmate was merely a jukebox capable of playing back pre recorded drum loops selected by a sliding head, and its use didn’t go beyond corny family singalongs, but it will always be remembered as the first sample based instrument ever created, a concept without which modern electronic music as we know it wouldn't exist.

After the inception of sampling by the Rhythmate, a new leap in the evolutionary record of the drum machine would be ushered by the use of analog synthesis as a new type of sound source for drum sounds. This innovation was accomplished in 1959 by The Rudolph Wurlitzer Company, better known as Wurlitzer, with the creation of the Sideman, an electro-mechanical drum machine that offered a choice of 12 electronically generated predefined rhythm patterns with variable tempos and a fixed kit of 10 electronic drum sounds, including Bass Drum, Brush, Claves, Cymbal, Maracas, Temple Block, Temple Block II, Tom Tom I, Tom Tom II and Wood Block. The patterns were based on dance genres of the time such as Bolero, Cha Cha, Foxtrot, Waltz and Samba, which could be selected and combined by a rotary knob on the top of the Sideman box. The tempo of the patterns was controlled by a slider that was used to set the speed of a rotating disc with metal contacts across its face that triggered the sounds rhythmically arranged in accordance to the selected patterns.

At the beginning of the 60’s, new models like the Thomas Band Master Model, the Elka Drummer One, the Maestro Rhythm King MRK-2 55 and the Minipops 7 by Keio (today Korg) retained the basic configuration of the Sideman, with the notable achievement of their huge size reduction, thanks to new breakthroughs in the field of electronic components like the solid state transistors.
But in spite of this structural enhancement, these machines were still very primitive from a musical standpoint, as they were, like the Sideman, limited to a bunch of fixed old-school patterns and a small kit of immutable sounds.
The musical limitations of these new type of portable drum machines, however, wouldn’t stop pioneering electronic artists like Jean Michel Jarre to use them in their productions even a decade later.

By the beginning of the 70’s it was clear that the possibilities under the current configuration of the drum machine were exhausted. Something new had to be added in order to expand the playability of the new generation of drum machines, and that’s what the Eko ComputeRhythm did.
The ComputeRhythm introduced the concept of programmability with a basic onboard beat matrix that didn't look too different from the modern step sequencers of today, and in the next years, other brands like PAIA with their Paia Programmable Drum Set, and Roland with the CR-78 CompuRhythm, consolidated the new technology.
Another step forward was given by the CompuRhythm, which apart from being fully programmable, was the first drum machine ever to boast a microprocessor, allowing users to store their sequences.

It’s hard to tell whether it was the 80’s that gave rise to the TR-808, (considered by many to be the most important drum machine of all times), or the other way around, at least as far as music is concerned.
A deceptively unsuccessful product upon its three first years of release, this iconic instrument made by Roland would soon become, for the first time in the history of popular music, a true replacement for acoustic drums in the new synthetic and futuristic aesthetics of the 80’s, as well as an unstoppable force within the emerging electronic, dance, and hip hop scenes of the time.
The synthesized electronic drum sounds of the 808 began to redefine the drum machine as an instrument in its own right, detached from a tradition of real drums emulations, a distinctive feature that made it so groundbreaking and novel.
With a set of sounds imitative of acoustic percussion like bass drum, snare, toms, conga, rimshot, claves, handclap, maracas, cowbell, cymbal, and hi-hat (open and closed), the 808 used the power of analog synthesis to recreate, rather than reproduce, real sounds.
In the rhythmic side, it featured 32 patterns chainable up to 768 measures, with accents for individual beats and the possibility to create entire tracks from start to end.
Tempo and time signature could also be set and modified in real time, and it was the first drum machine to introduce the concept of synchronization through a DIN sync port, a technology that paved the way for MIDI.

THE INCEPTION OF DIGITAL SAMPLING

By the time the 808 was gaining popularity among a new type of producers and early enthusiasts of its radical and unprecedented synthetic sounds, a more conservative sector of the musical scene was still demanding more realistic drum sounds capable of replacing real drums while retaining the organic sound of more traditional drum sets.
This demand was filled with the advent of a new revolutionary technology that would remain until our days one of the major cornerstones of electronic music: digital sampling.
The Linn Electronics LM-1 was the first drum machine to implement individual sample based drum sounds stored in digital memory, a very expensive component at the time, which made the LM-1 a luxurious piece of equipment, only accessible to a few big budget studios.
Another reason why the LM-1 remains one of the most significant links in the evolution of the drum machine and computer based music in general, is the introduction of other key concepts in music programmability such as quantization and swing.

Soon after the LM-1 introduced digital sampling, other contenders followed suit. Among these,
the Oberheim DMX became a hit with early Hip Hop producers due to its lower price and its addition of swappable memory cards, and the Sequential Circuits Drumtraks was the first drum machine to add midi integration. The Emu Systems Drumulator also became a huge success due to being the most affordable option of the new sample based format.

The new advancements introduced by this new generation of drum machines didn’t go unnoticed by Roland, which in 1983 released yet another device that would reach the legendary status of its predecessor.
The new TR-909 featured a hybrid analog/digital soundset and midi integration, and despite its low sales upon release, it would soon become the heart and soul of the rising Techno and House genres, and along with the 808, one of the most iconic drum machines of all time.

Before a more significant leap in functionality, it’s worth mentioning the advent of velocity sensitive pads as a new type of controller to trigger drum sounds, an innovation brought by Roger Linn with its latest product, the Linn 9000, which, in spite of precluding the demise of Linn Electronics in 1986 due to faulty software design, would influence greatly the design of the next iteration of drum machines.

After the huge success of pre-recorded digital sampling offered by the latest wave of drum machines, it began to become obvious that the next big thing would be allowing the user to record their own samples, or in other words, custom sampling; a technology first introduced by the MPC60, the first electronic instrument that due to this and other crucial and disrupting features, would initiate the transition of the drum machine into a whole new species: the digital workstation, a more powerful and flexible concept that would become the precursor of modern computer based DAWS, allowing users to take control of a more complex music production workflow by letting them record, mix and sequence their own sounds in a single piece of equipment.

THE RISE OF COMPUTER DAWS

Once this transition began, and with the growing power of computer processing, it was a matter of time for software to take over, and by the end of the 90’s, pioneering computer programs such as Cubase, Logic, Fruity Loops and Acid started to lay out the foundations of the new software based workstations, giving way to an entirely new technology that would replace the drum machine and the early digital workstations as the central nucleus of modern music production.

The culmination of this new revolution in music technology has given us incredibly powerful systems like Maschine and Ableton Live, which rely on extremely versatile and capable software combined with dedicated hardware controllers, as well as a vast array of independent midi controllers universally compatible with a large range of digital audio workstations, effectively decoupling hardware from software, a trend that has contributed further to eliminate the boundaries between the traditional drum machine and modern beat-making technology.

But in spite of all this revolutionary transformation made possible by software and computers, the fact remains that one has only to take a closer look into the latest DAWs, virtual drum machines and midi controllers to find the traces of decades of innovation and ingenuity that the evolution of the drum machine handed down to the future.

A career that spans over 2 decades. An open mind to different genres. The label owner to Armada Music’s ‘enfant terrible’ IHU Records. And the maestro behind countless dancefloor anthems, club...