Despite all the latest technological advancements, making music as a solo producer can be a daunting task. From musical theory to sound design, mixing, mastering, arranging, song writing, and composition, the list of skills one has to master to having a go at producing a decent track seems endless. Luckily for us, the ever expanding realm of music software is always seeking for new ways to help us out and make it all easier.

We’ve seen this in recent years in the rise of MIDI generators, a new type of plugins that can make our lives as producers easier by automating and streamlining some of the most intricate and complex aspects of music making such as music theory, harmony and MIDI writing. This article is an introduction to MIDI generators in the form of a review of some of the most advanced and useful plugins of this kind.

Cthulhu is a MIDI plugin primarily focused on facilitating the task of managing chords and generating chord progressions. It achieves these two goals by providing 127 chord slots per preset with each chord mapped to a single key across the entire key range, which allows you to trigger up to 127 different chords with a single keystroke.

The chord manager allows you to build chords note by note by double-clicking notes on the keyboard, or with the Learn function, which allows you to input chords as you play them on an external MIDI keyboard.

The chords can then be copied and pasted across the entire keyboard range, as well as edited by dragging their notes to adjacent keys. Each chord can consist of up to 8 notes, which makes it possible to use big extended chords and clusters, and even entire scales.

A randomiser for creating random chords is also available for experimentation, as well as velocity sliders to control the velocity of each note, and a preset manager for storing different chord sets.

On top of the chord manager, there’s a robust Arpeggiator capable of unfolding the notes of each chord in many creative ways, which allows you to generate Arps and melodies out of the chord sets stored in each preset. 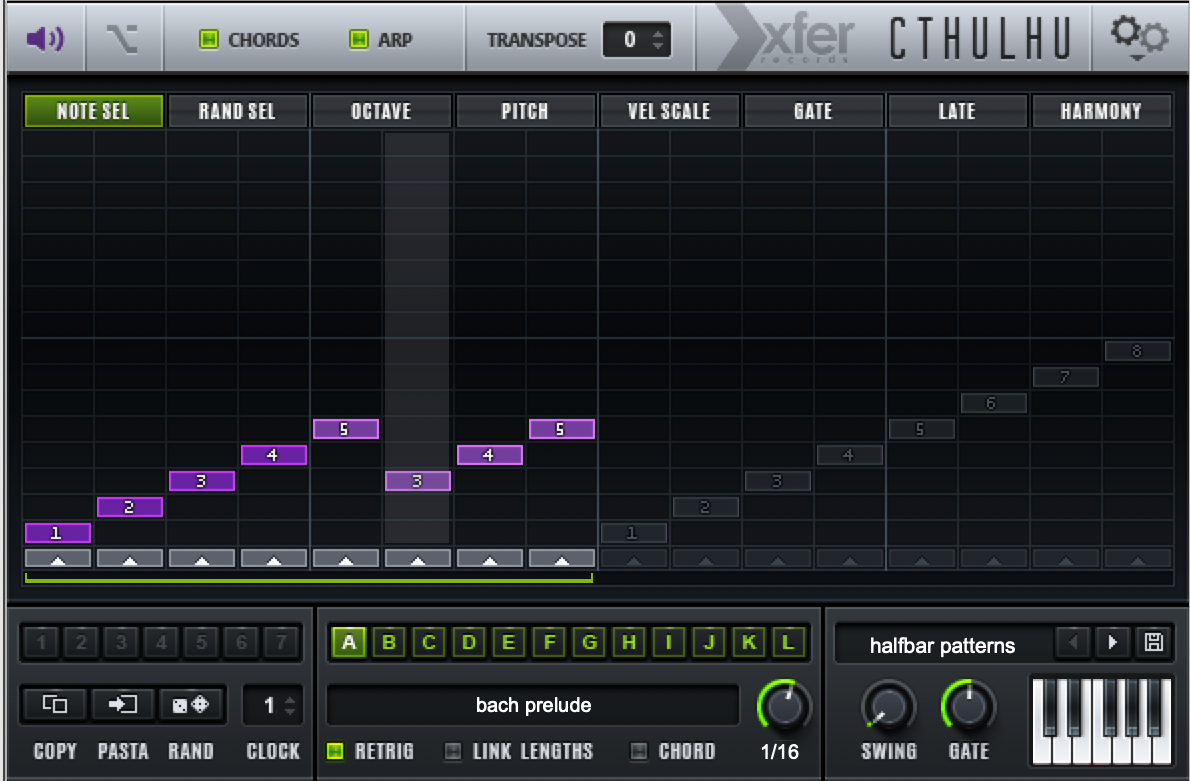 The Arpeggiator interface is divided into 8 different tabs, which allow you to control note selection, randomisation, octave, pitch, velocity, gate, delay, and harmony on a step sequencer with additional controls for pattern length, speed and step switches.

There’s a set of live slots for storing up to 12 different patterns, as well as a separate preset manager for storing pattern sets. The patterns can be triggered with the first 12 notes of the keyboard, which, along with the 127 different chords that you can store in the chord manager, allow for a staggering amount of pattern/chord combinations able to generate all sorts of chord progressions, melodies and Arps.

Scaler is a music theory plugin that takes care of the harmonic side of your tracks by giving you access to a staggering library of matching scales and chords in all possible keys and voicings. Scaler’s workflow is based around the detection or manual input of scales from which it suggests matching chords that you can use to harmonise your melodies or create entirely new chord progressions on the fly. 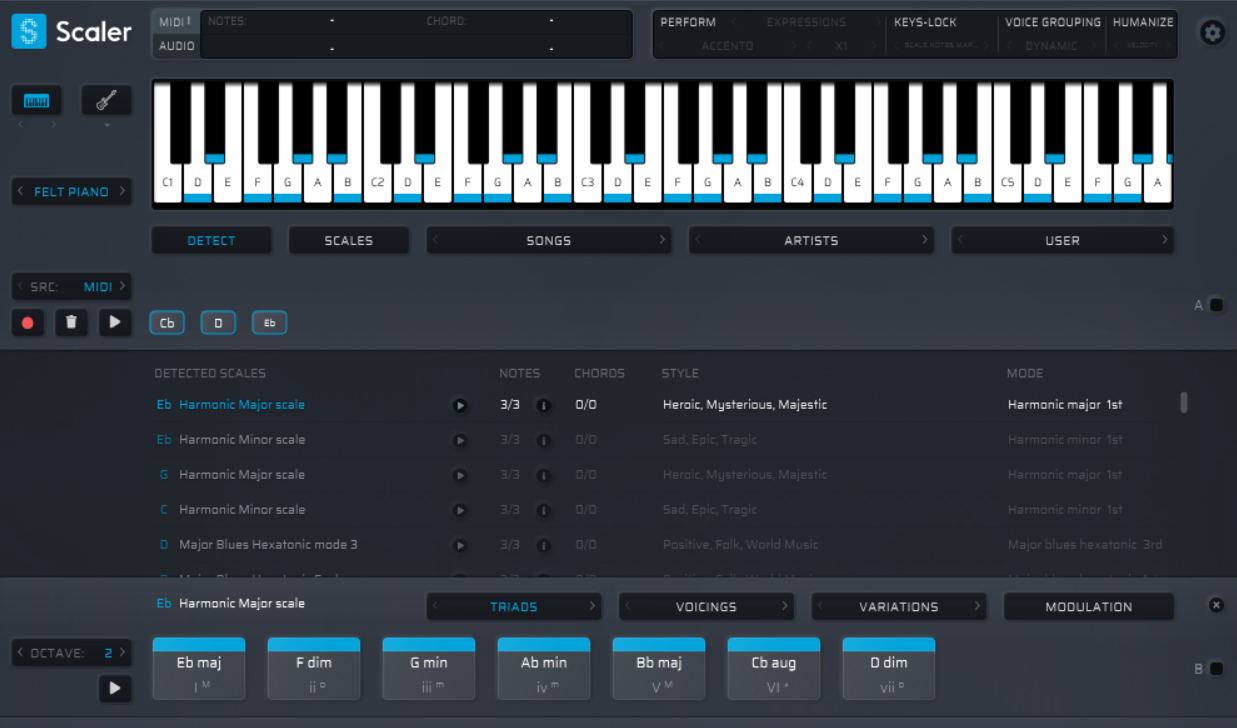 The detection system allows you to detect the key of any audio or MIDI source and suggest alternative scales and chords that match the input, which can speed up greatly the process of harmonising existing melodies, creating new ones or building new chord progressions.

Each chord set provides four categories of variations, including shape, voicing, scale degree, and modulation that can be used to get any imaginable chord like suspended chords, extended chords, dominant sevenths, Jazz chords, and more.

Once you’ve got your chord progression going, you can use the arpeggio and strum features to generate MIDI performances in real-time and in sync with your DAW, and then assign the generated MIDI to either Scaler’s built-in instruments or your own. Alternatively, you can drag and drop the generated MIDI patterns directly into your DAW.

Riffer is a MIDI tool that excels at the creation of MIDI riffs, melodies and sequences by providing a fully editable piano roll with many advanced features like instant Pitch, Duration, Velocity, and Density randomisation, Drag and Draw editing, and endless self-generated patterns. 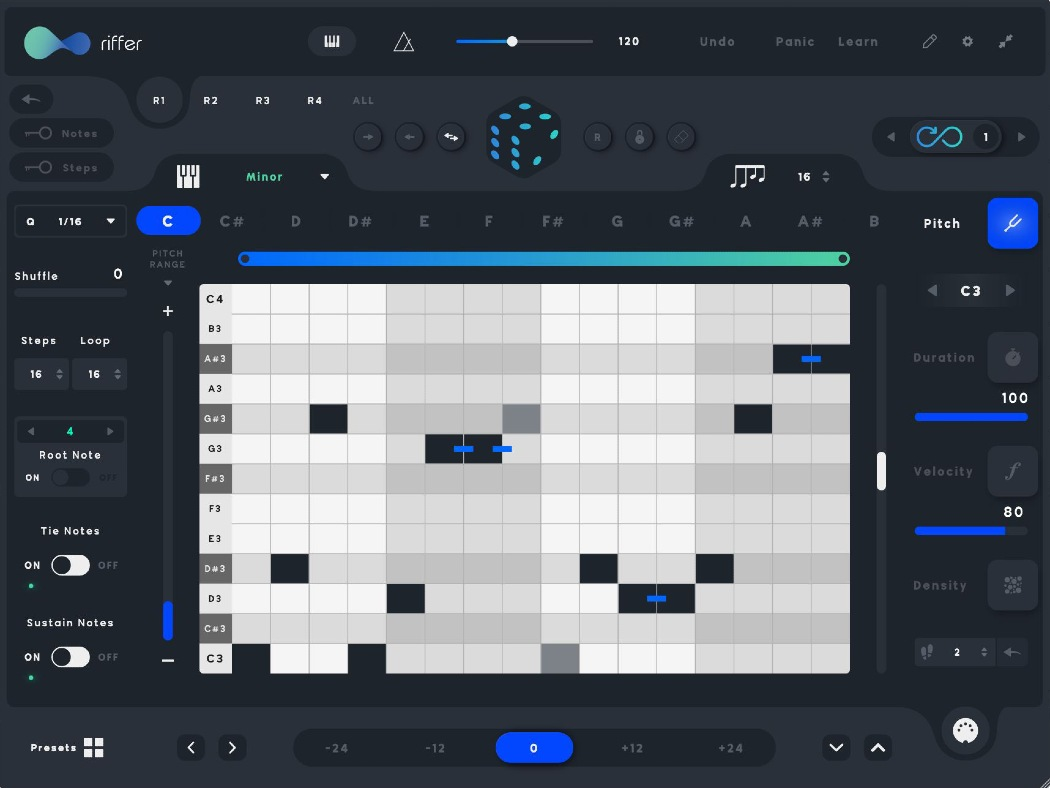 This plugin fills many gaps currently present in most MIDI editors with tons of smart features designed to speed up the process of MIDI writing, including one-click randomisation of critical MIDI parameters like Pitch, Length, Velocity and Density, as well as the option to Drag and Draw melodies and chords manually on the piano roll. These two options combined allow for the generation of both monophonic and polyphonic MIDI sequences at an undisputed speed.

The Randomiser is extremely smart, with lots of options to specify crucial aspects of the desired sequence, such as number of notes, steps and root notes, tie and sustain notes, quantisation, and scale. It also allows you to lock notes and steps, as well as Pitch, Length, Velocity and Density, so that they don’t get affected by the randomisation, allowing you to make precise variations as well as complete overhauls of entire sequences.

The editing capabilities are no less remarkable with an extensive set of editing options like vertical and horizontal nudge, octave shift, root transposition, pitch, time, steps and loop range, as well as Drag and Draw editing for Pitch, Length, Velocity and Density.

Other small features like universal MIDI connectivity, a library of 53 scales, custom scales, MIDI drag and drop, infinite self-generative mode, four independent polyphony lanes, and MIDI input for live situations complete an impressive feature set for one of the most innovative plugins of its kind to date.

In this introduction to MIDI generators, we have touched on three of the most comprehensive and advanced plugins in the exciting fields of MIDI and generative music. Each of them tackle the task of generating MIDI parts in a very particular and unique way, each providing different workflows and results while complementing each other with their own strengths to offer a powerful set of tools for advanced computer based music.

In the second installment of FL Studio Tips & Tricks we will show you how to further improve your workflow and producing within this world famous DAW.