'Ethno World 6: Voices' is the summit of a library that has continuously grown and been improved over a period of 16 years. This library sets new standards for the musical use of ethnic voices.

'Ethno World 6: Voices' is the summit of a library that has continuously grown and been improved over a period of 16 years. This library sets new standards for the musical use of ethnic voices.

Awarded film-composer Marcel Barsotti (Pope Joan, The Miracle of Bern) has gathered a gigantic selection of solo voices, phrases and choirs from all over the word from widely varying cultures.
'Ethno World 6: Voices' consists of approximately 177 patches with solo voices, phrases and choirs. The library consists of 8.68 GB of sample data made up of 5,230 samples. All recordings are delivered in a resolution of 24-Bit/44.1kHz Quality. 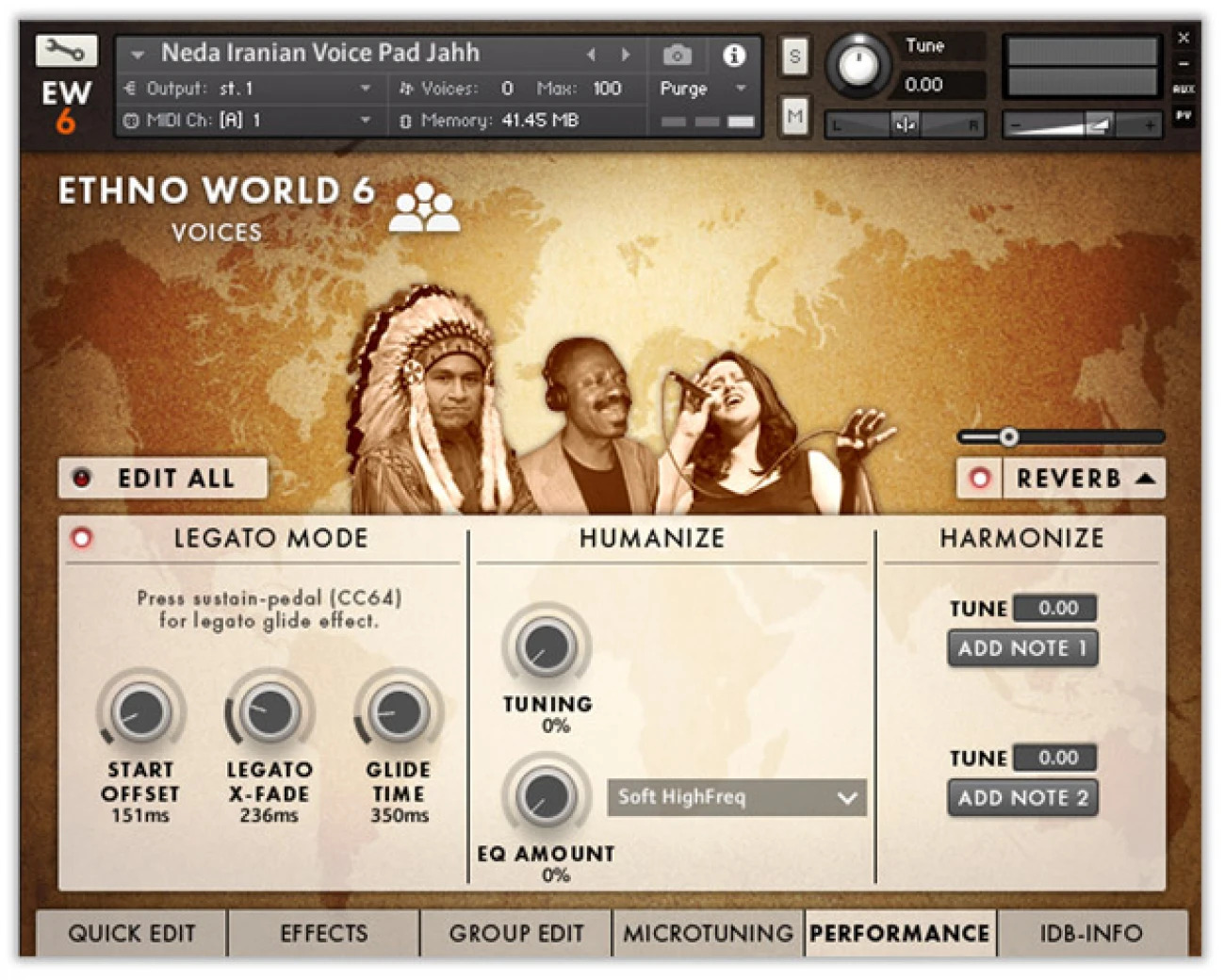 For the recordings that have been carried out under the direction of producer Andreas Hofner, singers from all over the world were involved. Recordings took place in different local studios with the use of first class gear such as microphones by Neumann and Brauner, SPL preamplifiers and converters by RME.
Content:
'Ethno World 6: Voices' comprises an incredible spectrum of voices from the most diverse regions of the world. Here, you will find the fitting voice-recordings for folkloric, ethnic as well as for modern music. The library offers extensive solo voices, phrases and choirs from Cameroon, Guinea, China, Iran, Turkey, Bulgaria, Northern Africa, Spain and Ukraine. The voices and choirs have been expanded by new contributions from Africa, Arabia, Jamaica and India. For example, the Houari Algerian rai singer is not only perfectly predestined to create an authentic atmosphere but equally suited to be used in EDM and Hip Hop.
Equally extraordinary are the Mongolian overtone singings, Balinese singing, the voices of the Chinese opera, Arabian, Indian and African choirs and solo voices as well as the chants of American natives. Thus, there is a versatile choice of voices being usable in the wide range of film-scoring, for ethnic or traditional music but also suited for modern music productions.
With its choice of voice-recordings, 'Ethno World 6: Voices' is the perfect library for film and television productions that demand authentic sounds from specifiy regions of the world. Naturally, the voices also lend themselves to be used in music productions of diverse genres that embrace these specific sonic elements, from Pop to Ambient or Dance.
The Interface:
'Ethno World 6: Voices' uses the free Kontakt 5 Player by Native Instruments as its sample engine and can of course be used with the full version of Kontakt 5, too. For the new version, the user-interface has been completely redesigned graphically and optimised for ultra fast access. There are numerous editing possibilities as well as innovative functions. 'Ethno World 6: Voices' supports the Native Kontrol Standard (NKS), which allows tagging and interaction with the NI Komplete Kontrol keyboards and NI Maschine.
Further additions are a new waveform display, visualisation of the sample-start-offset as well as a clearer use of the effects where, among other features, delay times are now displayed in tempo-related note values and milliseconds. The Timemachine (TM PRO) delivers significantly improved audio results with tempo adapted material, especially for polyphonic licks and loops.
And this is not only a benefit for the newly recorded sounds of 'Ethno World 6: Voices' but also for all sounds of 'Ethno World 5' which have been completely reworked in this regard. At the same time, the number of patches has been reduced leading to a clearer menu structure.
Thanks to the integrated convolution reverb, all voices sound exceptionally realistic and natural. By using top-quality filters, LFOs, tune, automation, harmonizer and further effects, all instruments and voices can be efficiently edited and manipulated if needed, allowing to create new sonic worlds equally suited for modern music genres and film productions.
Please Note:
Requires Kontakt Player 5.6.1

You can download, install and activate this product immediately after placing your order. You will receive the downloadable product, serial number and/or activation and installation instructions with your order confirmation. Please check our complete range of Virtual Instruments.

... from Producer Loops is an inspirational collection of powerful Construction Kits drawing on the best of Global...

... is inspired by Italian-American gangster movies like 'The Godfather'. Capone is deeply rooted in the Chicago mo...

... by Zion Music brings you 72 Bagal Baccha loops in WAV and Aiff/Apple Loops formats specially created to spice u...

... is inspired by genre greats like Initial D and includes Japanese narration within the pack. ... features a coll...

... adds some texture to your tracks with volumes 1, 2 and 3 of the popular 'Songwriter Guitars' loop packs. This b...

... from Organic Loops is a thoroughly authentic percussion library that includes 177 Loops and One-Shot samples sp...

... By Mango Loops brings you 1061 Tabla Loops in WAV and AIFF/APPLE formats designed to spice up contemporary beat...

... from Producer Loops and The Sound of Merlin is the follow-up release to our highly-acclaimed Manana. It takes y...

... by DABRO Music is a beautiful pack of electro-acoustic ukulele loops & samples containing sounds that will brin...