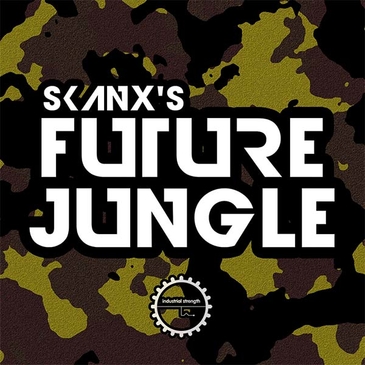 'Skanx's Future Jungle' takes your DAW to the heart of the Jungle. Cut back loud and fast to the nights when Los Angeles was a Jungle mecca, ruled by none other than veteran Junglist, mixtape master, and turntable wizard, R.A.W.

'Skanx's Future Jungle' takes your DAW to the heart of the Jungle. Cut back loud and fast to the nights when Los Angeles was a Jungle mecca, ruled by none other than veteran Junglist, mixtape master, and turntable wizard, R.A.W.

Now this famed name rises again, resurrecting himself as Skanx to roar fresh tricks into that old school sound, just in time to deliver 'Skanx's Future Jungle'.
This audio pack features more than 700 MB of deep, ninja-precision drum loops, rude boy bass sounds, mad FX, and the super authentic sounding Breaks you've been waiting for.
Jump into the sounds that respun the story of Electronic Music. Since '92, this man has been heating the streets of Los Angeles with a jungle fever that continues to this day and only promises to spread.
His sizzling sets have pounded the walls of Jungle and DnB clubs internationally, and shaken up festivals like EDC, Monster Massive, Respect, Konkrete Jungle, and Coachella. In '98, he was the first DJ to win a battle by scratching DnB records.
The DnB vision continues. With UK jungle producer DJ Sappo, Skanx created Maverick Recordings UK, a Future Jungle label delivering strictly good vibes.
His own sounds have been immortalised on labels including Priority, N20, Sound Sphere, Warner Bros, Thrive, Vortex, Thermal, Amen Factory, Babylon UK, as well as his own Mictlan & Void Audio experiments and his current label, Woofer Cooker.
'Skanx's Future Jungle' is in the house. Unleash your inner Junglist and go wild.
Use this pack to chop up Breaks, weave new grooves, and trick out any Jungle and DnB track.
These flawless 24-Bit/44.1 kHz audio files are formatted in Apple Loops and WAV. Sounds are keyed up at 130, 140, and 160 BPM so you can sync to the Jungle pulse across three crucial tempos.
This blistering pack also dishes up 106 REX2 files so you can re-work and thrash up any Break you like for total control when using these bad boy samples in your next track or remix.
Machete and camouflage net not included.

... comes in the form of an all-out call to arms from DnB giants, Fourward. This selection of presets is for Xfer R...

... by Production Master is a monstrous collection of in-your-face, toxic jump-up samples inspired by artists such...

... from Eksit Sounds has been in the lab cooking up a collection of finely tuned, humongous fully macro'd out and...

... by Ghost Syndicate is the second part of the label's 'Basement' series and moves further into the depths of Bas...

... is the fourth volume of this huge Drum & Bass collection. The Dabro team prepared a lot of heavy sounds from di...

... by Production Master will get you ready to step into the jungle. Celebrating 20 years of their Technique Record...

... by Industrial Strength is a set of Drum & Bass presets for Massive X....