'Cinematic Series Vol 2: Hacked Society' is a Future Music Power Award-winning collection which is perfect for producers looking to capture the essence of hacking culture, contemporary cyber-punk & science fiction. If you're a fan of Mr. Robot, Blade Runner, The Matrix, Deus Ex, Ghost In The Shell and other seminal works of futuristic hacker/cyber fiction, then this product is sure to satisfy. The eight brooding Construction Kits are complemented by existential spoken word vocals and real world foley recordings to give your soundtrack or experimental electronic & urban compositions authenticity.

'Cinematic Series Vol 2: Hacked Society' is a Future Music Power Award-winning collection which is perfect for producers looking to capture the essence of hacking culture, contemporary cyber-punk & science fiction. If you're a fan of Mr. Robot, Blade Runner, The Matrix, Deus Ex, Ghost In The Shell and other seminal works of futuristic hacker/cyber fiction, then this product is sure to satisfy. The eight brooding Construction Kits are complemented by existential spoken word vocals and real world foley recordings to give your soundtrack or experimental electronic & urban compositions authenticity. 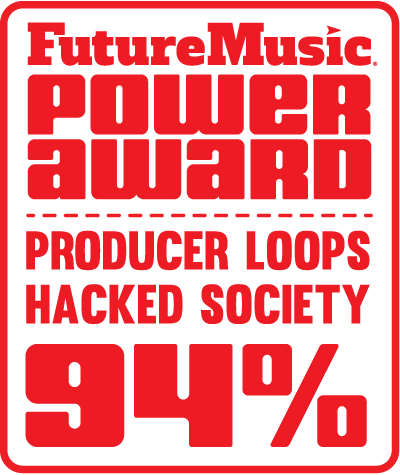 Packed full of subtle rhythmic pulses, futuristic synths and pads and ominous ambient recordings of bustling urban and industrial environments, use the included Construction Kits to create your own subtle pulsing underscores and integrate them seamlessly with other Producer Loops products to create slick, polished cues perfect for games, trailers or soundtracks.

This release has achieved the coveted Power Award from Future Music and was awarded a 5 Star rating of 94%. Click here to read the full pack review by Future Music.
Real World Samples:
Included are a number of field recordings of industrial and urban ambience, as well as isolated samples of computer key presses, digital glitches, and more.
Vocal Phrases:
Inside you'll find 11 spoken-word vocal tracks exploring themes of human identity, technology and free will, each designed to perfectly complement the included Construction Kits. Add these professionally recorded and performed vocals to a huge EDM or Psy Trance breakdown for an experimental twist - the possible applications are endless.

The Producer:
Lhasa Mencur is a composer and sound designer for interactive/visual media with a particular passion for games and virtual environments. Click here to listen to Lhasa's music on Soundcloud.

"With this pack I was inspired by both the series Mr. Robot, and the larger, real world contexts of global cyber warfare, the rise of corporations to power, whistleblowing and the hacking culture in which they sit. I approached this from a few different angles to create a Cinematic audio palette that captured its nuanced character.
Musically I tried to reflect a wide spectrum of emotions with subtle undertones throughout the 8 construction kits. I then placed each one in a physical space, much like a filmic scene – recording and designing unique location soundscapes for each one, ranging from Times Square traffic to the chatter of a Chinatown coffee shop or the subterranean whooshes of the subway system.
Early on I decided I wanted to literally personify the character of the pack, so wrote a script and hired a top quality voice actor to bring it to life.
An integral part of what I wanted to represent was also the physicality of hacking, the sounds of the 'real world' on the border between the digital underworld – often overlooked. I meticulously collected and recorded an assortment of custom high end gear; Keyboards, Mice, Routers, Black Phones etc. using conventional microphones as well as custom contact and induction coils to delve deeper into the sonic character of each device.
To contrast this I designed an assortment of rich digital effects and synthesized sounds to represent the more abstract aspects of the process. Both Mr.Robot and the global issues touched on are very influential to me, so I hope this pack inspires you, as they have me" - Lhasa Mencur.
MIDI Files Included:
Like so many other Producer Loops products, 'Cinematic Series Vol 2: Hacked Society' includes MIDI files for the majority of musical phrases heard in each Kit, allowing you to seamlessly mix your favourite synths and samplers with the sounds contained in the pack.
Royalty-Free:
All of the loops in this product are 100% Royalty-Free (including the vocal loops), so once purchased, you can use these loops in your commercial releases without having to pay any hidden costs.
Specifications:
• 8 Mini Construction Kits
• 121 Individual Audio Files
• Real World Field Recordings
• Professional Voiceover
• ACIDized WAV Files
• Apple Loops/AIFF Files
• Ableton Live Pack 8.1.3
• Loops sync to BPM
• 48 kHz/24-Bit
• PC/Mac Compatible
• Royalty-Free (No Exceptions)
How to Order:
Simply click "ADD TO CART" at the top of this page and choose the element or format you would like, then enter your details. Your Download Link will be sent to you by email immediately after your payment has been received.

Save 70% on THREE best-selling PL Sample Packs including Loopmix; a powerful plugin that generates unlimited ideas...

For a limited time only Save $100 and grab the Epic Cinematic Bundle from Producer Loops. Consisting of 5 stellar C...

'Let It Play' from Producer Loops, is the ultimate addition to your Pop arsenal. Featuring stunning vocals, crunchy...

Sounds of the Forest

'Sounds of the Forest' is inspired by sounds of nature. This collection of lo-fi beats combined with gorgeous pads...

Save $200 USD today and get SEVEN Trap Sample Packs for the price of ONE. This special bundle includes Quality Samp...

'Ambionica' by Producer Loops and The Sound of Merlin was inspired by the Berlin School of 1970s artists like Klaus...

Producer Loops is proud to present, 'Dystopia'. Get drawn into this dark and futuristic world of groundbreaking sou...

'The Jazz Lounge' from Producer Loops and The Sound of Merlin is a follow-up to Norwegian Jazz sample packs, 'Compa...

Bayou: A Tale from the Swamp

'Bayou: Tale from the Swamp' is quite possibly the most original Sample Pack of 2021. The music and professional vo...