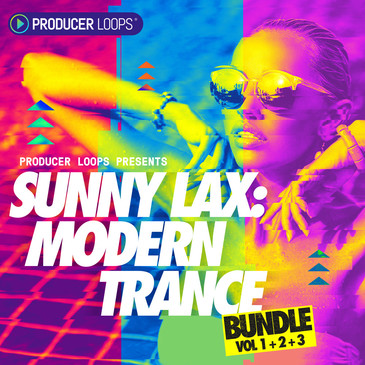 'Sunny Lax: Modern Trance Bundle (Vols 1-3)' is a mammoth bundle of pounding modern Trance packs featuring stunning production, a rich feature set and intelligent progressions and melodies. Featuring over a whopping 11GB of uncompressed content spread across 30 colossal Kits, this bundle is sure to bring your Trance productions into the 21st century and well beyond.

'Sunny Lax: Modern Trance Bundle (Vols 1-3)' is a mammoth bundle of pounding modern Trance packs featuring stunning production, a rich feature set and intelligent progressions and melodies. Featuring over a whopping 11GB of uncompressed content spread across 30 colossal Kits, this bundle is sure to bring your Trance productions into the 21st century and well beyond.

Each Kit has its own distinct mood, but thanks to the intuitive file naming and key/tempo metadata embedded in the files they can be used with each other and with your other Producer Loops titles with no trouble at all.

Expert production of over 1,500 loops containing radio-ready melodies and hooks and a professional feature set make this an essential addition to your Producer Loops library. Includes MIDI files.

Each loop is supplied in both dry and wet versions, meaning you can either use the effect mix heard in the demo files, or apply your own effects to the dry signal to create an entirely new sound.

These FX Tail files contain the decay portion of the wet loops, allowing you to end a phrase naturally without having to resort to fade outs or using up your DSP on custom reverbs and delays.

These non-looped samples contain the percussive and FX samples heard in the Kit demos, allowing you to program new rhythms and breaks to compliment the included rhythms.

For those that want to really get under the hood, 'Sunny Lax: Modern Trance Bundle (Vols 1-3)' includes a number of MIDI files allowing you to use your favourite synths and samplers with the melodic phrases found in the Kits, or to create new variations on the melodies and chord progressions.

Levente Márton, surely better known as Sunny Lax, was born in Romania but has been living in Hungary since he was four years old. As a young thirteen-year-old Levente was a keen enthusiast when it came to making Electronic music, and it was only a matter of time before the hobby that was to become a full-time profession.

Soon he had gained all the experience necessary to employ the latest production techniques that he is now famous for.

Sunny Lax the artist entered the Progressive circuit with releases entered in two major Hungarian remix competitions and his first success came in 2005 after he sent his new track "Puma" to one of the infamous Dance labels, Anjunabeats.

The trio Above & Beyond were so taken aback by his demo that they played the record for weeks on end (and didn't waste any time signing him up). As a result, his first EP was released and within a short time he received the full backing of all the key players on the scene, including the world's No. 1 DJ Armin van Buuren, who made "Puma" the Record Of The Week and featured it on his legendary ASOT Yearmix Album for 2005.

Driven by the success of these records Levente soon started receiving remix requests from almost every major label in the Dance music scene, averaging almost a mix a month. In addition to this, his sets have featured on major radio networks, and he has been asked to play at many key clubs around the world. But most importantly, and the thing that has continued to drive him, has been the overwhelming support from his fans, and for Levente, this is what makes it all worthwhile.

Levente has gone onto create Trance anthems including "Blue Bird", "Elda", "Miquë" and "Misgrey", and continued to work with key labels, such as Anjunabeats, Mondo, AVA Recordings and Deep Blue. At the same time he has continued to remix for all the biggest labels, and for leading artists on the scene, such as Above & Beyond, Darren Tate, Lange, Anhken, Daniel Kandi and Nitrous Oxide.

Levente is currently hard at work in the studio working on his first major album.

... contains six professional loops produced from scratch, which are ready to use in commercial and private product...

... by Equinox Sounds brings together another set of three collections by the label featuring beautiful, uplifting...

... by Freshly Squeezed Samples is loaded with 14 GB of truly game changing content, in what could well be one of t...

... by Freshly Squeezed Samples contains 6.3 GB of truly game changing content. This is the long awaited follow up...

... from Nano Musik Loops provides all three volumes of this series in one super-saving pack. This bundle features...

... by Nano Musik Loops brings you five masterful Construction Kits featuring Orchestral strings to give you that i...