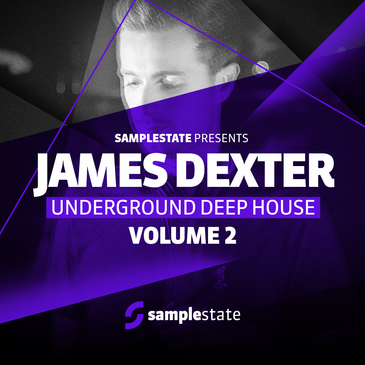 'James Dexter: Underground Deep House Vol 2' is another high quality slice of deep and groove laden House  Picking up where the best-selling first volume left off and raising the bar in every aspect, this pack takes his trademark eye for detail and exceptional production technique and delivers you an inspirational sample product that will energise your latest Deep or Tech House productions.
James' music has been released with a number of well-respected & highly influential labels including the likes of Poker Flat Recording, Dessous Recordings, Rebellion, Cyclic Records, Roush, Elrow, Bondage Music, Inermu & Little Helpers. With releases forthcoming on Audiojack's 'Gruuv', Tuccillo's Unblock Music as well as several vinyl only releases demonstrate James's position as a influential DJ and producer within underground House music is in no doubt.
As always, Samplestate's philosophy is to bring you forward-thinking and inspiring artists, delivering unique high quality sample packs that can provide endless inspiration for their latest productions.
The pack comes prepared in both Apple Loops format, including pre-analysed .aif files for Logic as well as a standard WAV pack. Both pack varieties include sampler instrument for every one-shot sample in (EXS24/Kontakt/NN-XT/Halion).
Check out the demo for an idea of what this pack has in store.
Product Details:
• 24-Bit Quality
• 671 MB
• 144 Drum Loops (Including Variations)
• 10 Perc Loops
• 32 Bass Loops
• 13 Lead Loops
• 47 Synth Loops
• 9 Claps
• 8 Hi-Hats
• 10 Kicks
• 23 Perc
• 13 FX & Background
• 21 Pads
• 19 Stabs
• 10 Vox
• 57 Soft Sampler Patches for EXS24, Halion, Kontakt & NN-XT

... by Vandalism brings you female vocals and MIDI loops. These vocal lines are ready to soar over any modern track...

... by Bingoshakerz is jam-packed with 380+ MB of soulful, harmonic and stuttering vocal loops primed for any elect...

... brings you 50 groovy MIDI files which are 100% Royaly-Free and ready to use for your next upcoming House produc...

... brings you another set of five Construction Kits inspired by producers such as EDX, AVAION, Jay Pryor, Gorgon C...

... is the 6th installment of this successful and outstanding female full vocal series. Inside this versatile colle...

... brings another series packed with vocals and MIDI loops. These male vocal lines are ready to soar over any mode...

... is the 8th installment of this legendary vocal series. Inside this versatile collection, you'll find complete v...