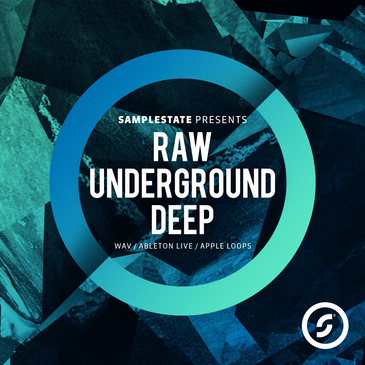 'Raw Underground Deep' from Samplestate brings you an inspired slice of deep, raw and underground House that takes its cues from forward-thinking artists new and old.

'Raw Underground Deep' from Samplestate brings you an inspired slice of deep, raw and underground House that takes its cues from forward-thinking artists new and old.

Developing the classic sounds of Deep House from pioneers such as Dennis Ferrer and Kerri Chandler, and mixing those raw fundamentals of House with new production techniques to deliver a diverse and inspiring sample product.
With one ear on the past, it also brings influence from modern producers such as Audiojack, Darius Syrossian, Diego Krase, Djebale, Dungeon Meat, Motor City Drum Ensemble, Gerd and the multitudes of modern artists that lurk on vinyl-only releases in record stores around the world.
This pack features over 1 GB of studio quality 24-Bit WAVs or .aiff files. Including 176 drum loops in 120, 122 and 125 BPM, including full, top, no kick and mid variations. 174 music loops including, dirty basslines, dusty and saturated chord stab loops, and lead lines.
One-shot samples include, 161 drum samples, 16 bass samples, 34 FX, 54 Pad/Chord stabs, and each sample has been pre-programmed for EXS24, HAlion, Kontakt, and NN-XT.
The pack comes prepared in both Apple Loops format, including pre-analysed aif files for Logic, also in Ableton Live format with pre-programmed drum and instrument racks for Live. Finally offered is a standard WAV pack. All pack varieties include sampler instrument for every one-shot sample in (EXS24/Kontakt/NN-XT/Halion).
Check the demo to see what this quality product has in store.
Product Details:
• 24-Bit Quality
• 1 GB
• 176 Drum Loops
• 85 Bass Loops
• 55 Chord & Stab Loops
• 34 Lead Synth Loops
• 349 REX2 Files
• 161 Drum Samples
• 16 Bass Samples
• 34 FX
54 Pad/Chord Stabs
110 Soft Sampler Patches for EXS24, Halion, Kontakt and NN-XT

'Deep Tech Melodies' by Smokey Loops is a fantastic collection of Deep Tech House sounds ready to be mixed in your...

... brings you another set of five Construction Kits inspired by producers such as EDX, AVAION, Jay Pryor, Gorgon C...

... from Scientec Audio features 50 key-labelled MIDI files for Deep House or any other genre that needs a groovy p...

... is a collection featuring all Deep House MIDI packs released by Essential Audio Media. This bundle comes with o...

... is the ultimate collection for producers who are searching for their next House placement. This is pure commerc...

... from Catalyst Samples brings you the sounds of the summer, with beach and guitar vibes fresh for 2018 and beyon...

... by O! Samples is packed not just with smoothing vocals but is also a collection of deep and tender Construction...

... is the continuation these expertly designed Serum 2 presets for dark House music. This soundset brings you top...