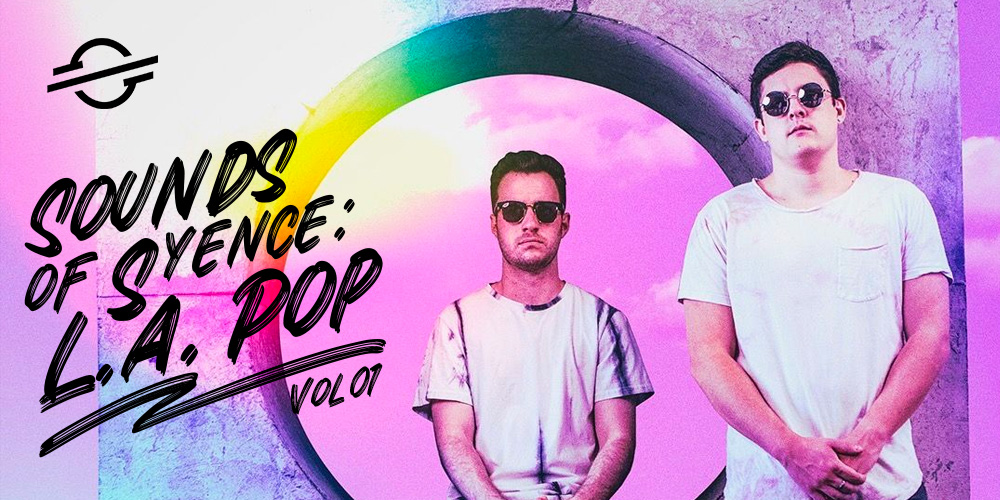 Producer Loops has collaborated with up-and-coming Bass Pop Artist Syence on their exclusive sample pack 'Sounds of Syence: LA Pop Vol 1'. We have interviewed the duo responsible for more than 20 million worldwide streams who debuted on Spotify's Global Viral Charts to discuss their pack, share production insights on the Bass Pop genre and to learn a little more about Syence and what we can expect from them in the future!

PL: Tell us a little bit about yourself... Who is 'Syence', what have you accomplished in the music industry so far and where you are located?

Syence: We are Zach Montoya and Brayden James. We met in a science class at Cal Poly SLO and started making music together almost immediately. Syence officially started in 2015 and after years of work we found success and hit Spotify's Global Viral Charts with our hit single "We Won't Leave You". Following the hit, we performed at Snowglobe Music Festival. Along the way we have gained support from acts like The Chainsmokers, Gryffin, Illenium, Two Friends, Alison Wonderland, Hardwell and R3HAB to name a few. We have also performed alongside acts such as Gryffin, Kap Slap, Autograf, Bingo Players, Arty, ARMNHMR and more. Today we reside in Los Angeles and continue to work on building out a catalog of music with our signature Bass Pop sound.

PL: Your latest single 'Replay' featuring Fairlane and Kwesi was something special! Tell us how that song came about?

Syence: Replay is a personal favorite of ours and truly a special track. The way it started is a cool story. Our friend Heather Sommer who we made "Temporary High" with told us that Fairlane had recently hit her up and mentioned that he had been playing out "Temporary High" at his shows. We sent him a note thanking him for the support and struck up a quick conversation. Shortly after, he sent over a demo of his guitar, piano and Kwesi's unreal voice singing what you all know today as "Replay". Tyler/Fairlane really wanted us to collab and bring that "Temporary High" vibe to the track, so we took a session or two and polished it off to get a first version of the track. Tyler added in some more guitar and then it was pretty much done. It was one of the quickest collabs we've done remotely for sure. As of now it's actually Brayden's personal favorite track we've ever put out.

PL: Those synths on the drop!? Without giving away your trade secrets - how did you mix and process those? Any go-to plugins?

Syence: In terms of sound design, it's ALL ABOUT LAYERING. Find sounds that work well together to create a larger than life sound that feels like your own. From there we honestly do pretty typical stuff in terms of saturation, distortion, etc. to bring the sounds to its full potential. iZotope Track 2 is a personal favorite as well as Decapitator from SoundToys. Honestly Ableton's stock saturator isn't half bad either - but instead of relying on specific plugins every time, focus more on what sounds good and run with it! There's a million ways to make something sound good so keep playing around until you find the right sonic character.

PL: Moving on to your work with us here at Producer Loops... Tell everyone about the process behind creating your very first construction-kit sample pack?

Syence: First off, thank you Producer Loops for the opportunity. It was a blast! Creating the construction kits was a rewarding process. We were able to really dig into our creativity to whip up as much material as possible for other producers to use moving forward. Some projects were demos from years past that never saw the light of day and we were able to jump back in and develop them, which was a cool experience. It was very interesting seeing how far we've come and how much our sound has developed as we tweaked and perfected these old projects into construction kits. We tried to utilize as much signature Bass Pop sound design as possible so other producers out there can start to experiment with the genre we've grown to love so much.

PL: What can customers of Producer Loops expect in terms of content and quality when they purchase 'Sounds of Syence: LA Pop Vol 1'?

Syence: If you like bass and you like Pop music, this sample pack is for YOU. We've dug into our secret sauce for bass sound design to get material together for you to whip up some killer bass tracks while also focusing on finding unique/interesting melodic materials for your more typical pop inspired productions. We personally love finding drum samples that smack and are proud of the drum ideas we've put together too if you're looking for a new favorite kick or percussion loop to get the groove of your tracks going in the early creative stages of making a song.

PL: What do you hope customers will be able to create by using 'Sounds of Syence: LA Pop Vol 1'?

Syence: We hope you can create music you're proud of. There are so many sample packs out there that have inspired EPs worth of music for us and if we can help one of you write a new song, we'll be so stoked! Please send us your stuff if you use any of the sounds!!

PL: What do you believe sets your sounds and samples apart from the rest?

Syence: I think it's our bass sound design. It's very rare today to find bass samples that aren't either wildly aggressive/hectic or cookie-cutter/been there, done that sounding. Because of our layering approach to making our own unique bass sounds, we've been able to come up with sounds that feel commercial or easy on the ear which allows them to fit into almost any style of track. On top of that, we've spent ample time finding samples that compliment this unique approach to bass sound design to help you elevate your tracks to sound more radio-ready.

PL: Can we expect more sample-packs from you in the future?

Syence: Just tell us when and where and we'll be on it! :)

PL: Where can our customers find you and your music? Any socials you want to let them know about?

Syence: We're just about everywhere (Spotify, YouTube, Apple Music, etc.) Just search "Syence" on your favorite streaming platform and you should find us, no problem. We have tons of new music coming in 2021 so make sure to follow us on Instagram to stay up to date @syenceofficial. Hit us up on Twitter too if you're more into that like Brayden is (also @syenceofficial).

PL: Lastly, what does the future hold for Syence?

Syence: In the short term, our first merch line EVER along with a new rebrand. Same name Syence, completely elevated look for the entire brand. Shout-out Big Mind Creative for the incredible work. In the long term, hopefully Covid 19 free and continuing developing our sound within the Bass Pop genre. We'd be elated to see groups of producers making Bass Pop tracks in the future. Would be so wild to see it grow beyond just us. Our goal is to be touring the world and releasing albums, sharing our story and love for music. We hope to be meeting fans along the way to hear their stories too. It's our favorite part meeting other like-minded homies!

PL: Awesome! Thank you both so much for taking the time to answer our questions, and I'm sure our customers will love the content too!

Syence: Anytime! This was a lot of fun :)