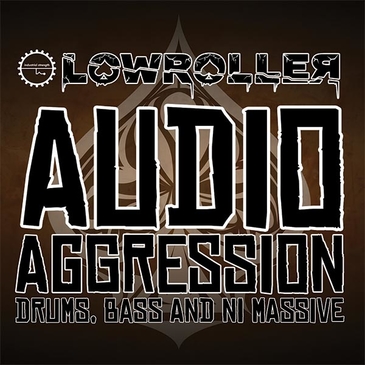 'Lowroller: Audio Aggression' from heavy-hitting artist Lowroller and Industrial Strength Samples is a Hard DnB pack to shatter your speakers. This pack warps the twisted contours of Drum & Bass, Crossbreed, and Hardcore to create a smart set of innovative sounds.

'Lowroller: Audio Aggression' from heavy-hitting artist Lowroller and Industrial Strength Samples is a Hard DnB pack to shatter your speakers. This pack warps the twisted contours of Drum & Bass, Crossbreed, and Hardcore to create a smart set of innovative sounds.

Stuffed with head-banging content, this follow-up production pack unearths enough bass and Hardcore kicks to rumble the dancefloor. You'll find wily arpeggiators, fierce stabs, thick pads, unique Ambient sounds, and dirty feedback noise.
Let the syncopation sink in with more than 190 drum breaks and loops, including both straight and swung versions of each drum loop. Plus dig into a slew of twisted sweeps, growls, and dirty Reese bass leads.
With Loops queued at 174 BPM, this royalty-free pack is ready for any project. The formats include WAV, Apple Loops, REX2, Battery4 and of course NI Maschine.
Load samples from custom NI Kontakt patches where the Reese leads, arpeggiators, bass loops, sweeps, and pads are fully-playable across two octaves - each note recorded separately to bring you 24 high-quality semitones for every sound. Each of the sounds are included as audio in case you don't use Kontakt.
This "not ready for the main stream" pack unleashes another monster set of Lowroller's custom NI Massive presets, making this a serious production weapon for any EDM producer. Each sound contains Marco's and has plenty of room for you to tweak further. But that's not all folks, ISR included a bonus Battery 4 kit with 40 ISR samples and another NI Massive pack which features an additional 47 patches from across of their range of packs.
Lowroller shucks all stereotypes, electing to push his music over the brink. His productions lead in Crossbreed DnB, from crowd-smashing Hardcore to the unexplored corners of Drum & Bass and Industrial. Catch his sounds on labels including Industrial Strength Records, Prspct Recordings, Nekrolog 1k, Future Sickness and Tainted Audio, and his collaborations with Angerfist, Cooh, Lenny Dee and Negative A.
'Lowroller: Audio Aggression' is loaded with all you need to get Hard EDM and Hardcore tracks underway. This pack dances circles in, DnB, Drumstep, Hard Breaks, Bass Culture Music, Hardcore, Dubstep, Brostep, Industrial, Break Core and of course Crossbreed.
This beast of a pack works as one with Lowroller's 'NI Massive Aggression' to bring the next level in Hard Electronic audio and patches into your next production or video game sound track.
There's only one place to be when 'Lowroller: Audio Aggression' comes for your DAW - sitting in the producer's chair, finger on the trigger. Click.
Product Contains:
• 41 Massive Patches
• 46 ISR NI Massive Patches
• 229 Apple Loops
• 229 REX2 Files
• 229 Drum Loops
• 118 Drum Shots
• 7 Ambiences
• 14 Effects
• 28 Drum Fills
• 4 Feedback FX
• 1 ISR Battery 4 Kit
• 11 Battery 4 Kits
• 1 NI Maschine Kit

... supplies all the production elements you need to make rip-roaring Riddim tracks. Push the needle with 290 loops...

... unlocks the secrets of how Dubstep artists create their insane sounds. The best part of this soundset for the S...

Get 25 MB of exclusive free loops from the 'Dub Extraction Triple Bundle'. Get a taste of the Kits & extras availab...

'Dubstep City' by Smokey Loops is a fresh collection of Dubstep sounds....

What About: Future Dubstep Jade

... by W. A. Production takes everything you love about Future Bass and increases the intensity and the harshness o...