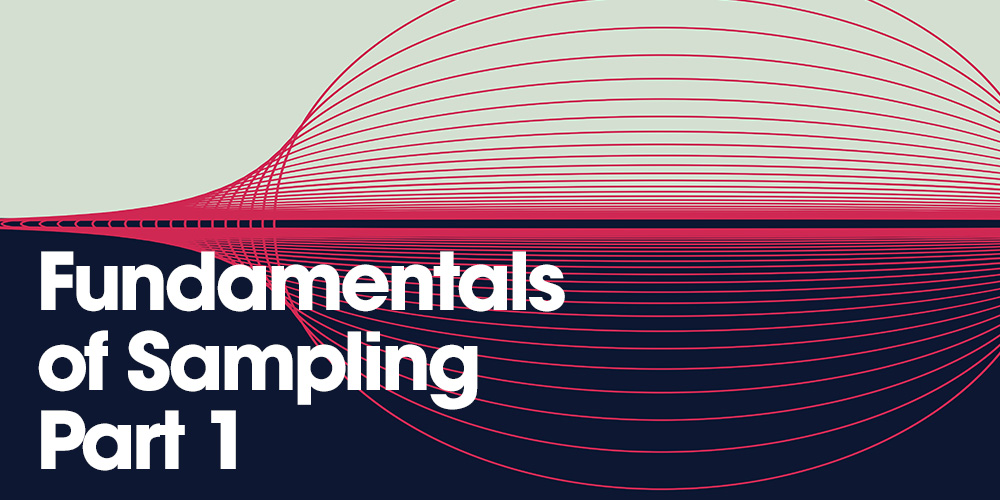 Digital sampling is the technology that underpins the entire practice of modern music production, underlying every conceivable form of musical project, regardless of genre, format and purpose. Common denominator of production fields as disparate as old-school mixing and mastering engineering, beatmaking, and film music scoring, this discipline is the nucleus of all the current and near future endeavours and developments in sound generation, processing and editing. This two parts article will cover the basics of sampling such as definition, types and formats, as well as some other more technical concepts like root key, range, tempo, and more.
Sampling
Digital sampling is the mathematical representation of sound waves through sequences of discrete values also called samples. These samples contain information about the amplitude of the signal throughout time, and they can be visualised in a sound editor as the dots that connect the lines that draw the shape of a waveform by zooming in on it.
Other sound properties like pitch emerge from repetitive patterns of identical wave shapes, whose repetition frequency determines the pitch of the sound.
Another important concept related to sound that can be visualised through sampling is the harmonic, which is a secondary, overlapping wave that is a multiple of the frequency of the original one, also known as the fundamental.
Sample Types
The audio samples used in modern music production can be grouped into several types that determine their features and usages. The main feature used to categorise samples is their length, so based on this feature, we can find stems, loops and one-shots.
Stems are the longest type of samples, and they usually comprise entire individual tracks in a mix, so they can be several minutes long and include silence gaps along with lots of musical information such as key, tempo, and even several instruments layered together. They are primarily used for remixes.
Loops are medium length samples, usually between one and four measures long and may contain key and tempo information. Loops constitute one of the most popular and widespread sample types to produce tracks and beats in a very quick and intuitive way. One-shots are the shortest type of samples, and they typically involve a single sound with no tempo information.
One-shots can be used to create sample based instruments such as drum kits or playable instruments that can be triggered and controlled via MIDI.
Formats
Audio samples are delivered in several formats according to their usage and features. WAV and AIFF are the default ones developed by Microsoft and Apple respectively. These primary formats include basic information such as bit depth, sampling rate, and basic metadata, but have been upgraded with several additions like the inclusion of data for pitch and tempo, as well as algorithms for advanced time-stretching and pitch-shifting under the names of Acid Loops and Apple Loops respectively.
Another format specifically developed for music production is REX2 by Properllerheads. Supported by many professional DAWs and samplers, REX2 loops include a series of breakpoints located at zero-crossings in the waveforms that allow for the loops to be triggered from several different start points. This makes it possible to rearrange different loop sections to change their original order as well as making the loops adaptable to the BPM of the host application.
Other common formats include multi-sample patches created with samplers such as Kontakt, Battery, and Maschine, that comprise entire sample kits ready to be used as drum machines or sample based instruments.
Root Key & Range
Root key is an important concept that makes reference to the original pitch in which a sample is recorded. Root key information is important to maintain a consistent and unified tonality when combining samples in a DAW. It also allows samplers to match the pitch of a sample to the key where it is mapped.
Key range on the other hand, is the ability of a sampler to extend the pitch of a sample beyond its original root key by means of extrapolation, so that a single recorded pitch can be used to set up a whole range of pitches. This allows us to create sample based instruments with fewer resources and better performance at the cost of decreasing quality due to the artificial and noticeable results that excessive extrapolation yields. Hence, it is advisable to maintain a balance between performance and quality by avoiding key ranges spanning beyond an octave.
Tempo
Tempo is the speed, measured in beats per minute, in which a sample has been recorded. This is one of the main features that characterise musical genres, which usually range between relatively close BPM values, like 120 to 125 BPM in House or 90 to 95 in Hip Hop. DAWs and samplers come usually equipped with BPM detection and time-stretching algorithms that make possible the automatic or manual synchronization of loops to the host tempo.
Nonetheless, as it’s the case with pitch-shifting and interpolation algorithms, pushing time-stretching too far beyond the original BPM of a sample can cause noticeable degradation in quality and fidelity, for which it’s recommendable to keep the use of this feature down to a minimum and instead rely on a good file tagging and structuring system in order to avoid the combination of loops with BPM values too far apart.
Summary
In this introduction to sampling we have started looking into what sampling is and how certain properties of a sound such as samples, pitch and harmonics can be visualised on a sound editor. Then we moved on and described popular sample types such as stems, loops and one-shots, going briefly over their properties, characteristics and usages. After that, we continued with an overview on the different formats available in sampling, as well as some basic concepts and features such as root key, range and tempo.